EDC Methods is a series of posts about everyday carry gear concepts, tips and hacks. View all related posts or check out the gear shop.

For an ordinary civilian in everyday life and an active operative in the field of cover, the most ideal defense tool is the one that’s always accessible, locally permissive and situationally adaptive.

A type of tool that is always on your person with plausible reasoning for carry, legal to possess within the locale and functional in most scenarios.

Not a lot of weapons fit those parameters, but one of them is a keychain defense utility.

The concept of adding a defensive weapon as part of your keychain is as old as keys themselves, of which can be used as a force multiplier on its own.

Assuming the added on “weapon” is legal and reasonably sized, it can be equipped at literally all times and at all locations – with no problems. Because like wallets and phones, keys are supposed to be the most essential items that we all carry.

A gun, knife or baton, while having substantially more potential stopping power, can not be on your person in the same universal way – licensed or not. 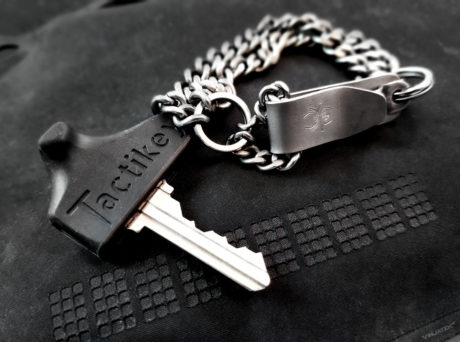 The physical attributes and metallic composition of keys make them natural force multipliers. But just as important as the striking point of melee weapons are the other ends of them, the handle or grip – of which keys lack. Adding a Tactikey to a key you already use gives you that advantage. Available here.

This is the most minimalistic and permissive keychain defense method. As pictured, a Tactikey is attached to my titanium escape bracelet – used as a “chain”. 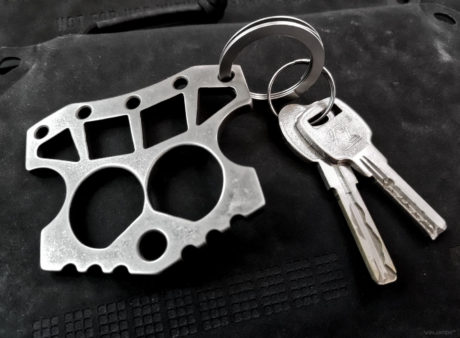 This is my actual setup that I use for when I decide to get an apartment while vagabonding – since I don’t always need keys as a constant nomad.

The surprising thing about this method is that the defensive tool for this is a titanium knuck from Raidops. Surprising because “brass knuckles” have almost no legal avenues of public possession or carry, anywhere in the world. They are extremely illegal.

And yet, this setup works overtly and well, including through 5 international airports so far. This is how:

I carry this inside the waistband, the knuck is tucked in but the keys and key rings are hanging over the belt or pants. Securely “holstered” and positioned strategically for fluid deployment to open doors or knock heads in 2 swift moves.

I tried an experiment with airport security. After placing my phone, wallet, watch, and passport on the security tray, I also placed this keychain along with everything else in plain view as if they were just keys. Moving along hidden in plain site through the x-ray scanner, like an ordinary thing.

The non-threatening appearance, non-magnetic and low density properties of the alloy and relatively compact size makes it seem like it’s just a part of a harmless set of someone’s keys.

In any case, it’s not without risk so you need to be smart and inventive in what you carry and how you carry keychain defenses. As always, be vigilant.