A working titanium prototype restraint escape bracelet. Intended to be worn overtly like jewelry but concealed for its purpose and metal detection.

The purpose of these kits are to “escape” and “evade” from capture of kidnapping or unlawful detainment. Specifically to get free from handcuffs, plastic ties, rope and other forms of forced restraints. [Excerpt]

Made entirely from various grades of titanium, unlike most other “survival bracelets”, this kit doesn’t look like one. It decisively passes as a silver or platinum Cuban chain link bracelet. That’s because it is partially made from such an item, just in a different material.

This is a one of a kind kit, as it’s the secondary prototype of this series of my escape bracelets.

The final field models will never be posted publicly for security concerns as they are actively being used by my colleagues. But this specific bracelet is still an excellent example of the concept. 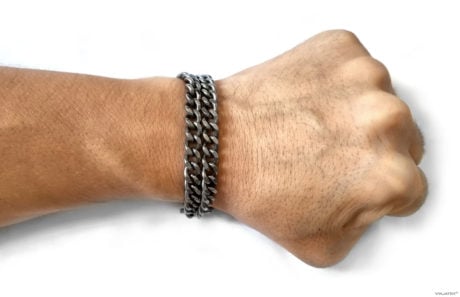 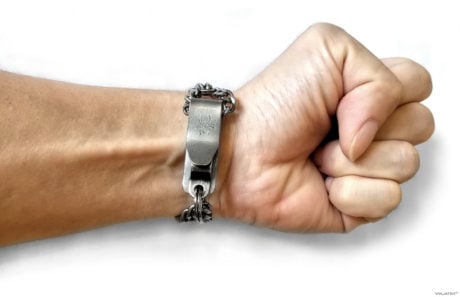 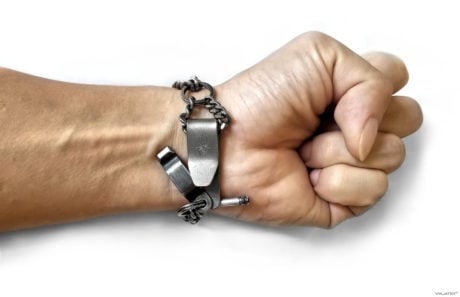 The purpose of this wearable device is to have an openly concealed set of tools that are intended to aid the wearer from unlocking universal handcuffs or cut loose alternative restraining methods such as rope, zip ties of duct tape – while being restrained.

As with any on your person “standby” SERE kits or tools, the items must be effectively concealed or disguised and readily deployable with ease.

Instead of utilizing typical kit pouch or tool attachment systems, a bracelet, which is strategically located where the restraints will be closest, is in most cases the most ideal method.

An escape bracelet is only viable if it looks nothing like what it’s purposed to do, it should be misdirective.

So I opted for the men’s style of a subdued chain bracelet, fashionably and unsuspiciously wearable with any attire for any situation.

This prototype features a custom titanium handcuff key and also from the same alloy, a carbodized blade with razor sharp micro serrations. 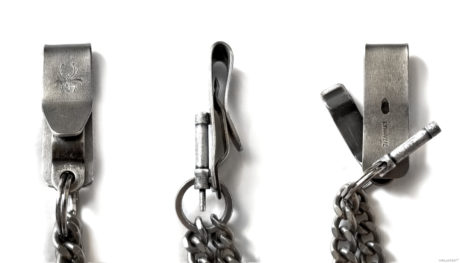 The key is machined precisely to fit with the titanium ring which can swivel for positioning. When not in use, the key “clicks” and locks into place behind the titanium clasp, hidden between that and the wrist.

The blade doubles as the clasp locking bar, keeping the escape bracelet in place. When needed, the blade swivels out and the cutting edge is exposed for use.

Initially the blade and key were rubberized black for grip, but I later removed it for a more graceful and streamlined sleek appearance. Also to not put unnecessary attention to the tools.

The finished models of these escape bracelets look entirely different, more refined, but work the same way. Additionally, retractable titanium shims are integrated. The clasps have a false opening mechanism, making it impossible (without tools) to open without knowing the hidden lock.

I hope to never use these tools but it’s nice to always have a literal trick up my sleeve, just in case.