Why Travelers Should Carry Handcuff Keys

A covertly equipped handcuff key for a foreigner abroad is the smallest part of their everyday carry gear but potentially the most important.

“Gear to survive or endure dangerous and hazardous scenarios are valuable but gear to avoid them is invaluable.” -John Cain

Specialized handcuff keys and other escape tools have been a part of my everyday carry equipment for my professional life for years but have found them to be just as useful in civilian life, especially while traveling.

While packing up to leave a hostel in Bangkok, I met Alex. A Canadian pre-med student on his gap year interested in my strange gear. We got to talking and I gave him a TIHK handcuff key and showed him how to use it.

Then I headed north towards Vietnam, he headed south towards the Thai islands, where his story begins.

Every full moon on the small paradise island of Koh Phangan, an event occurs that started in the mid 80’s. It’s called the Full Moon Party. With up to 30,000 attendees at each event, it’s the largest recurring beach party in the world. It’s gone through many changes over the years but what remains is its crazy-intense-debaucherous-wild-hedonistic essence.

Thousands of young travelers from every country mixing with each other with powerful music blasting on a true paradise beach. What could go wrong?

When you have this much explosive and dynamic social activity going on, the socially inept tend to have a hard time fitting in, even to the point of becoming a recluse.

Traveling alone through a strange country and attending a monstrous party with thousands of strangers, Alex became that recluse.

Recluses at parties are obvious but ignored.

Belly, a slick Thai local saw poor Alex, but instead of ignoring him like everyone else, he made him his party-protege, despite the language barrier.

Anyone in Alex’s shoes would be delighted to chill with Belly, especially with the 3 girls he was with.

And so he partied on, finally…

Nearly 10 hours later at about 5 in the morning with the party still going strong, Alex was resting, sitting on a picnic table staring into the abyss of dancers dancing away against the endless black ocean.

Suddenly, Belly appears from the moving crowd like mist. He runs straight to Alex out of breath and tells him something in broken English; “Police ???? hide ??? ??? later ???…” Then he hands Alex a Pringles chips bag (tubular paperboard can) and vanished into the crowd.

Dazed and confused, as Alex starts to put the Pringles can between his feet, he’s blinded by a flashlight.

The light then trails directly to the Pringles can. His eyes focus and he can clearly see it’s the police.

One of the cops takes the Pringles can as his partner looks around the vicinity for Belly (I presume).

Again in broken but better English, the cop asks Alex if the Pringles is his. Alex confirms. The cop then opens the can and lays out the contents on the picnic table. To shocking surprise, Alex sees it’s dozens of pills (probably ecstasy) with just as many baggies of white powder.

Alex immediately and nervously denies it’s his now and tries to explain that he was just holding it for a friend.

The cop then handcuffs him and yells at him in Thai.

Alex, now detained and in tears, sits with the cop as his partner searches for Belly within the crowd.

Facing 10 to 20 years in a Thai prison, he remembers the handcuff key I gave him. But the key is hidden on the front of his shorts with his hands cuffed in back.

With the cop sitting right next to him but preoccupied also looking for Belly, Alex starts twisting his shorts to reach the key. He gets it and tries to open the cuffs…

He fails and drops the key, but not on the sand.

Blindly and nervously shaking, he feels for the key on the table. He finds it. Tries again. Drops it again. Repeat…

Amazed at himself but also realizing the implications of it, he loses the key again but this time it drops to the sand, lost forever. But no matter, one hand is free.

An eternity passes by (probably 5 minutes). His hand free from the shackles, making pretend it’s still engaged as he builds up the courage to run.

Another eternity later, he bolts into the sea of people like a bat out of hell. Adrenaline at max output with his left hand sporting a shiny bracelet. He runs and runs.

Alex has been sober all his life including this night but the euphoria he feels as he finally makes it back to his bungalow is the epitome of a natural high.

He remembers my “5 minute training” and shaves his mustache, gives himself a drastic haircut, bruises his cheeks and forehead, changes into completely different colored clothing and buries the ones he’s wearing.

Not long after that, he made it safely back to Bangkok.

Because of miscommunication that could happen to anyone that’s traveling to foreign countries, Alex almost went to prison for decades because he was holding a Pringles can for literally 30 seconds. 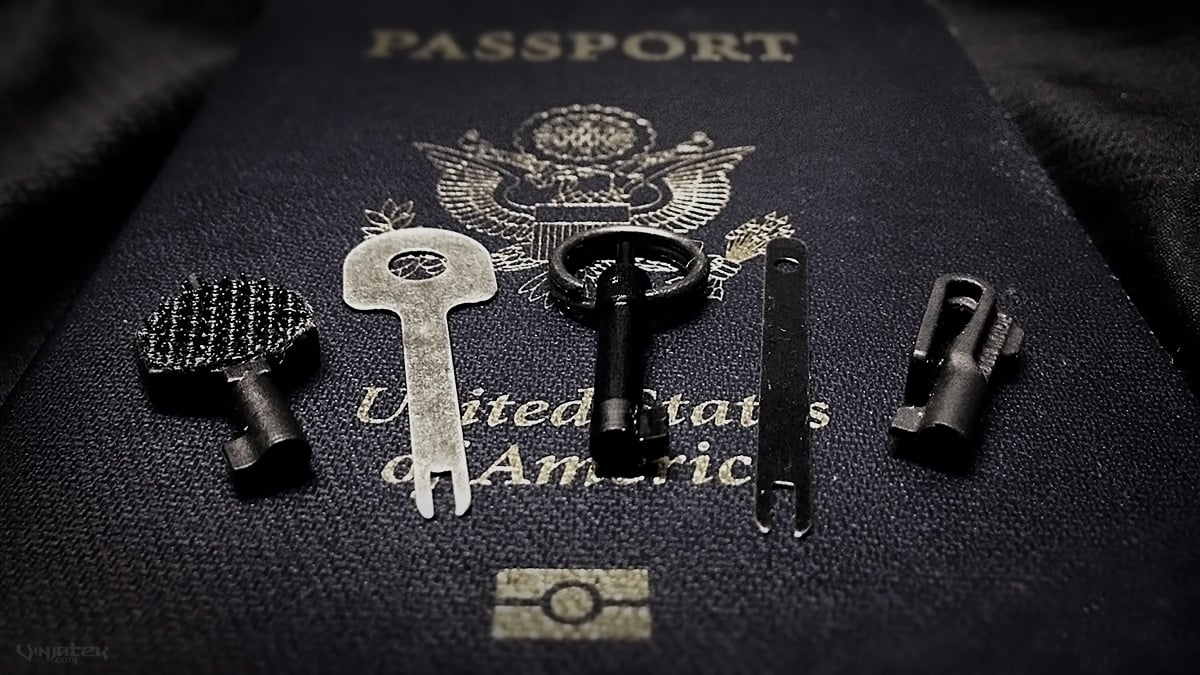 A life saved by a piece of plastic, a handcuff key.

There will be detractors on civilians carrying handcuff keys. If you are one of those, I’d like to ask you: “What would you do in Alex’s exact situation?”

Would you let yourself be arrested and spend a quarter century in a foreign prison because the “law is the law”?

Remember, you didn’t murder anyone, steal from a store or even knew you were committing a crime. For all intents and purposes, bad friggen luck.

I don’t know about you but I will not go to prison for holding a bag of chips if I can help it. And it’s not like “I was holding it for a friend” or “I didn’t know it was drugs” is going to hold up in court in this scenario.

If you still don’t want to control your own destiny and trust a foreign justice system implicitly, then at best you can; get yourself officially arrested, processed into their system, go to lockup, wait to see a judge, meet with an embassy appointed lawyer, go back to lockup and 6 months later you’re rather set free or sent to prison.

I received the longest email ever from Alex (not his real name by the way) shortly after. I wish it was written on paper by hand as it was motivating and one of the most touching pieces of words I have ever read.

Back home or abroad, it’s unlikely to be unfairly or unjustly arrested but it’s more likely to occur as a foreigner because of unfamiliar international laws, cultural differences and inaccurate communication.

Then there’s also the possibility of kidnapping.

It will most likely never happen to you (or so you think), but it does happen quite frequently on a global scale.

So as Franz Kafka so wisely says, “Better to have, and not need, than to need, and not have.”, reinforced by the fact that a covert handcuff key is smaller than a clothing button and almost as inconspicuous.