Using a Watch as “Brass Knuckles”

This is in response to the 12 (and counting) readers of whom has asked me about using a watch as “brass knuckles” since my Rolex Submariner review.

Designed to preserve and concentrate a punch’s force by directing it toward a harder and smaller contact area, they result in increased tissue disruption, including an increased likelihood of fracturing the victim’s bones on impact. -Brass Knuckles

Apparently, wrapping a wrist watch around the proximal phalanges (between the base and middle knuckles) as a punching force multiplier is a thing.

One of my specialities is improvised weapology as well as being multidisciplined in close quarters combat and I can assure you that this does not work in theory and certainly not in practice – it should not be a thing.

One of these 12 followers in question pointed me to a video of a young Bruce Wayne using a Rolex (the same I wear) to repeatedly punch the face of his bully. I saw the clip and responded with this: “Don’t do that.”

If that occurred in real life, if a skinny boy with skinny fingers struck a person’s face as hard as he could several times with this directly between his finger bones and the target’s skull / jaw / teeth, his hand would be have had significantly more damage. 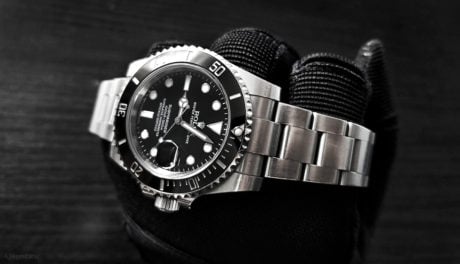 This watch has a thick and protruding sapphire front, second only to diamonds in hardness. The bezel is a special kind of ceramic that’s much harder than steel. Logically, these 2 extremely hard materials would be ideal as the striking point to soft tissue and bone.

The problem with using a watch as brass knuckles is energy transfer. All that hardness and force will create massive energy and it has to go somewhere. Having the strike point placed directly on the proximal phalanges is like tying a bare rebar to your shin with no padding underneath and using it as a force multiplier.

Imagine hitting a target’s skull with this improvised shin as hard as you can, it will most certainly cause damage to you both. Except that the target may still be standing and you crawling.

So in this instance, the target may have some serious head wounds but your primary hand will be useless.

As supposed to using actual brass knuckles or your simply your bare fists. The line-of-force doesn’t start and end at the contact strike point like with the watch and finger bones. It starts at the knuckles or brass knuckles, through the hand, forearm and if done right, all the way through the shoulders and most of the upper body.

However, brass knuckles are widely illegal for carry for most of the world so it’s not the most ideal fist enhancer. But a watch shouldn’t even be considered, even in an emergency.

Like a watch, most people have keys on their person at all times so this is actually the best alternative to brass knuckles when it comes to legality.

Brass knuckles are designed as almost armor for your hands, as it should be, to protect against self-damage, which keys are not. This creates a high potential of hurting your own hands when using keys as brass knuckles, although not nearly as bad as watches.

To remedy this inherent risk, adding a TactiKey (pictured below) to your own key will give some of the benefits a actual brass knuckles; increased counter-force and stabilized ergonomic handling. 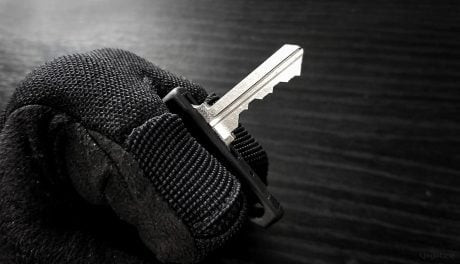 Another follower sent me this clip of Bond in Casino Royale (at 2:40) using an Omega Seamaster Watch as brass knuckles and asked if that would be an ideal street defense method using his Seiko Diver Watch.

But that’s just the 2 instances of 12 people asking me about this in less than a year. Obviously this weaponolgy concept is somewhat popular, but it should not be – it’s ineffective and counterintuitive.

So using a watch as brass knuckles is an urban myth. I suppose I can see why some would see it as a useful last resort fist augmenter, but no, just no.