From the makers of Kevlar® hoodies and ceramic armored shirts comes an ultra-minimal, agile and waterproof glow in the dark technical jacket.

“When your jacket can glow like kryptonite you know there’s some batshit crazy tech going on. Made from a highly responsive material that can be charged by exposing it to almost any light source, one of the most technologically advanced jackets the world has ever seen. WIRED’s Sports Gear of the Year 2017.” -Vollebak 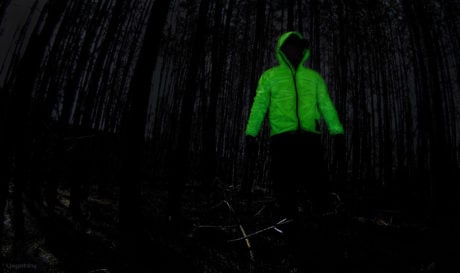 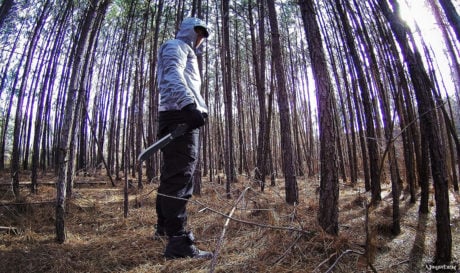 You don’t have to know me personally to know that I like my gear and apparel to be exclusively black – with 1 or 2 exceptions. Perhaps in part of my New York roots but it’s mostly because I simply like the darkness.

For almost the entirety of my career, I didn’t get to wear black. Because of the nature of our work, our “uniforms” were whatever the local people were wearing – true urban camouflage.

The Vollebak Solar Charged Jacket ($350) is the complete opposite of dark and camo. In fact, it’s an actual light source and an agent of anti-camouflage.

Forget the fact that this jacket glows in the dark like it’s been irradiated in tritium. When in the light, it’s a battleship grey with some translucency. It’s rather handsome and subtle, but a far cry from black.

I mention all this to press upon you how much I like this jacket. That I proudly added a non-black article of clothing to my very limited packing space as I live out of a backpack. It certainly sounds silly but it’s a testament to this most outstanding kit. 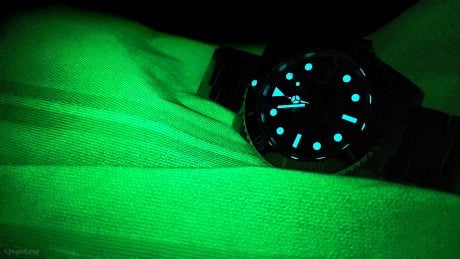 So yes, this jacket is essentially reverse-camouflage, which is the point and executed very well. It’s no gimmick though, there’s many practical uses of such a feature of a jacket, but also, it’s a high-end piece of technical apparel that you won’t find anywhere else.

One of my pro members sent me a link to the Vollebak Solar Charged Jacket product page last year and I almost dismissed it as one of those over hyped Kickstarter clothing startups that produce crap.

I only scrolled down for the images with slight interest and was about to close out the browser window until I saw a pic of Jason Fox, a former special forces sergeant wearing a strange black shirt. I clicked on it and it took me to what I now unequivocally consider the best technical / tactical t-shirt ever made.

The Condition Black Ceramic T-Shirt. I read every word and examined every photo on that product page. I ordered the shit out of it, hard.

48 hours later, it arrived and without even testing it, it became my favorite t-shirt of all time. A few minutes later I went back online and ordered the baselayer version. Then eventually the midlayer, completing the Condition Black Range trifecta.

I almost dismissed this relatively new but arguably the most innovative clothing company right now. Instead it’s become my favorite apparel brand.

And so I have a glow in the dark jacket. A jacket I’m going to get some damn good use out of. It’s replaced my Triple Aught Design Raptor Hoodie jacket. Which is also a high-end waterproof packable shell that’s served me well for the last couple of years. 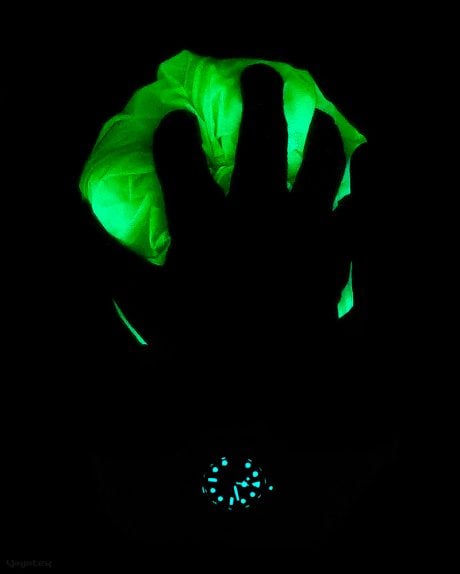 The Vollebak Solar Charged Jacket is not as tough but it’s 1/3 lighter in weight and packs a lot smaller for extremely flexible packing and carrying options. 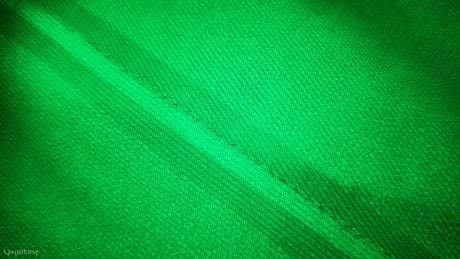 The incredible packability was one of the strongest selling points for me. The high-tech glow in the dark fabric helps but it’s the overall minimalistic design that keeps it so mobile, light and packable. 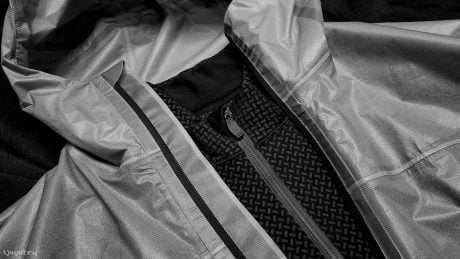 I’ve never seen fabric like this. It’s triple layered with a phosphorescent compound (glow material) in the center. It’s silky smooth and seemingly weightless with a touch of shimmer. Vollebak uses the word “membrane” to describe the fabric and that’s not just marketing talk, upon close examination you can see how it’s similar to the cell structure of living plants. 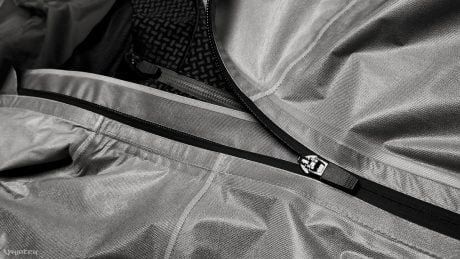 The waterproof rating is a low 2,500mm but with taped seams throughout and an incomparable storm guard waterproof zipper system. It won’t keep you dry under torrential downpours for long but mild rain will be fine. Fabric breathability is most excellent in tests, further enhanced with 3 vents under each arm pit. 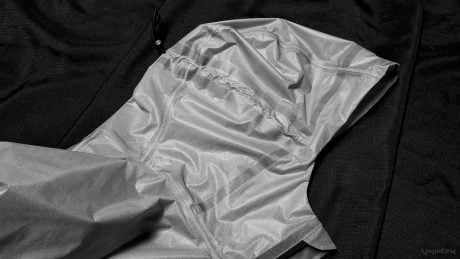 As far as hoods go, this has the most comfortable and maneuverable one I can recall wearing on a jacket. The Raptor Hoodie always felt like it was pulling my head down and didn’t move well when turning. The Stealth Hoodie LT may just have the best ever but I can’t get over how it feels like there’s nothing over my head with the Solar Charged Jacket’s hood. 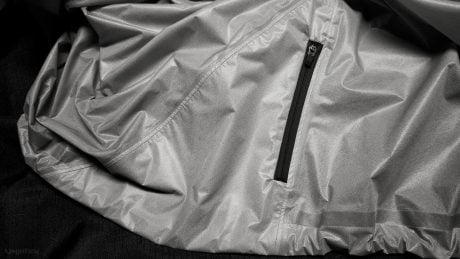 It has a single pocket, oddly but strategically located on the back right hip. It’s triangularly shaped with a waterproof zipper. It’s perfect for wallets, mobile phones, keys and other small / important items. 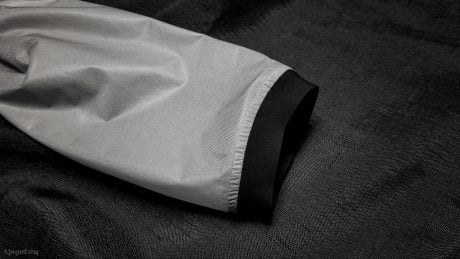 To maximize on minimizing, Vollebak used laser-cut bonded sleeve cuffs with a type of ultra thin elastic I don’t recall seeing before. So no straps or extra material, but it’s articulated inward for a fitted fit.

In Vollebak’s own words: “Whether you’re heading out training in the dark, running an ultra through the mountains, climbing, riding, or out on the water, it works as a phenomenal lightweight rain jacket, windbreaker, emergency layer or safety device.” 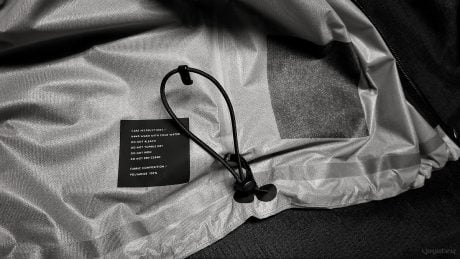 At its core, that’s what this is best for. An impromptu jacket for specialized purposes or circumstances. Something that you can almost always have on you without weighing you down or taking up space. Especially for when you may not even need a jacket but always good to have just in case with no nuisance. 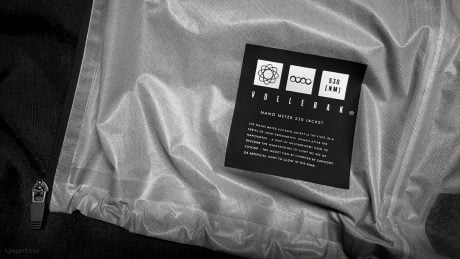 So it’s not intended as a primary jacket for full-time use or harsh winters. Although I will be using it all the time, but I tend to stay in warmer parts of the world.

I would have loved this thing as a kid, who wouldn’t? But only because it glows like unstable kryptonite. As an adult, survivalist and former operative, I can appreciate the many practical applications that can be utilized with such an illuminating feature.

For starters, it’s a damn fine technical jacket even without the glow. But it does glow, like a giant glow stick, and for many hours. I haven’t been able to test Vollebak’s claim of 12 hours but it does outlast my Rolex Submariner’s lume at about 7+ hours.

I like to run at night, way after the sun goes down. Recently I’d put on my Goruck TAC Hat with an LED torch I integrated onto it. Not so I can see, but so drivers can see me. Now I just “charge” my Solar Charged Jacket with any light source then head out. So much better than using a light or reflectives. 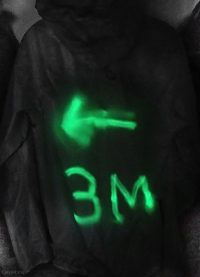 That’s just one way of using the glow function of this jacket with plenty of other uses; ambient light source, signaling, spotting and even messaging.

Such as writing on it like your spray painting or penciling on the jacket, depending on the type of light source.

This opens up a whole new set of survival and trekking tactics without carrying additional gear – but just by having something you’d have anyways, a jacket.

You can have fun with it as well of course; creeping up on friends in the dark or partying at a nightclub. 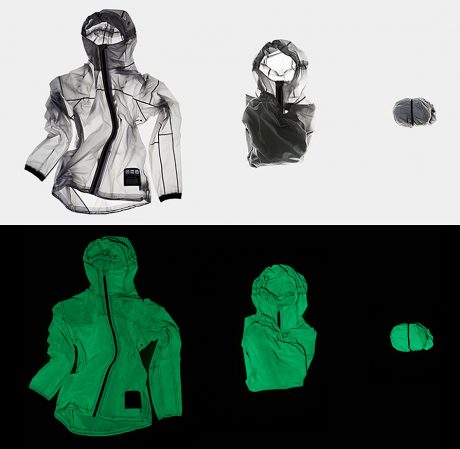 True innovation is risky in the clothing business, even to huge and long established brands like The North Face and Arc’teryx. That’s why they take incremental advancements in their product lines over time to ease consumers into buying safe bets.

Vollebak is new and relatively small but they push the boundaries of technical apparel like I’ve never seen before. They take risks with seemingly ridiculous and edgy concepts like a premium glow in the dark jacket.

But their risky bets pan out exceptionally. They make damn good goods you won’t find anywhere else.