An advanced technical performance jacket for active use in the fiercest weather yet during any season. Body armor for the elements.

“Battle the elements with the Stealth Hoodie LT, a durable, all weather softshell. Highly adaptive and designed to withstand harsh climates, our most technically advanced jacket perfectly combines the impermeable nature of a hardshell with the comfort and breathability of a softshell.” -Triple Aught Design 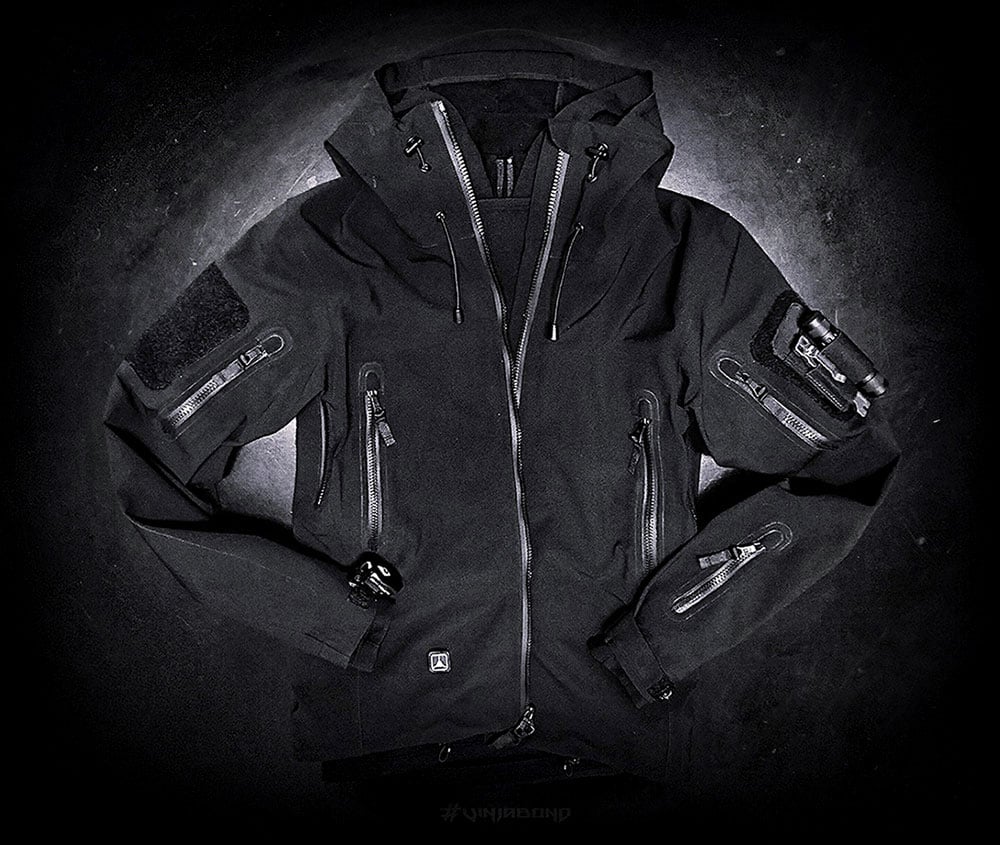 I’m starting to sound like a broken record with these Triple Aught Design kit reviews. I could just write “This shit is hot, buy it right now” and be done with it.

The better the product the harder the review and this one took more than the FAST Pack EDC of the same makers. That’s because the Stealth Hoodie LT is my first apparel review and the fact that it’s the most exacting jacket I could conceive of wearing.

In the 3 months I’ve had the Stealth Hoodie LT, the only other (actual) jacket I’ve used before it for the better part of the decade is a $3500 Prada couture jacket. *Paid by Uncle Sam for work related purposes.

I’ve admired Triple Aught Design’s line of jackets since I’ve been equipping their gear years ago but never had any interest in replacing my one-of-a-kind Prada. Because how could a jacket made specifically for me and costing 10 times as much be replaced?

But here I am now, praising a jacket that costs $3025 less to be the greater. For what it’s worth, that mortgage of a jacket is still in good condition, but only because I wore it with delicate care – something I don’t have to do with the Stealth Hoodie LT.

The only times I would get complimented on my Prada jacket would be when someone noticed the logo on the sleeve. But with this jacket, the compliments came first then the question of who makes it, and of course most people had no idea who TAD was but was instantly interested in the brand, such is the TAD charm. 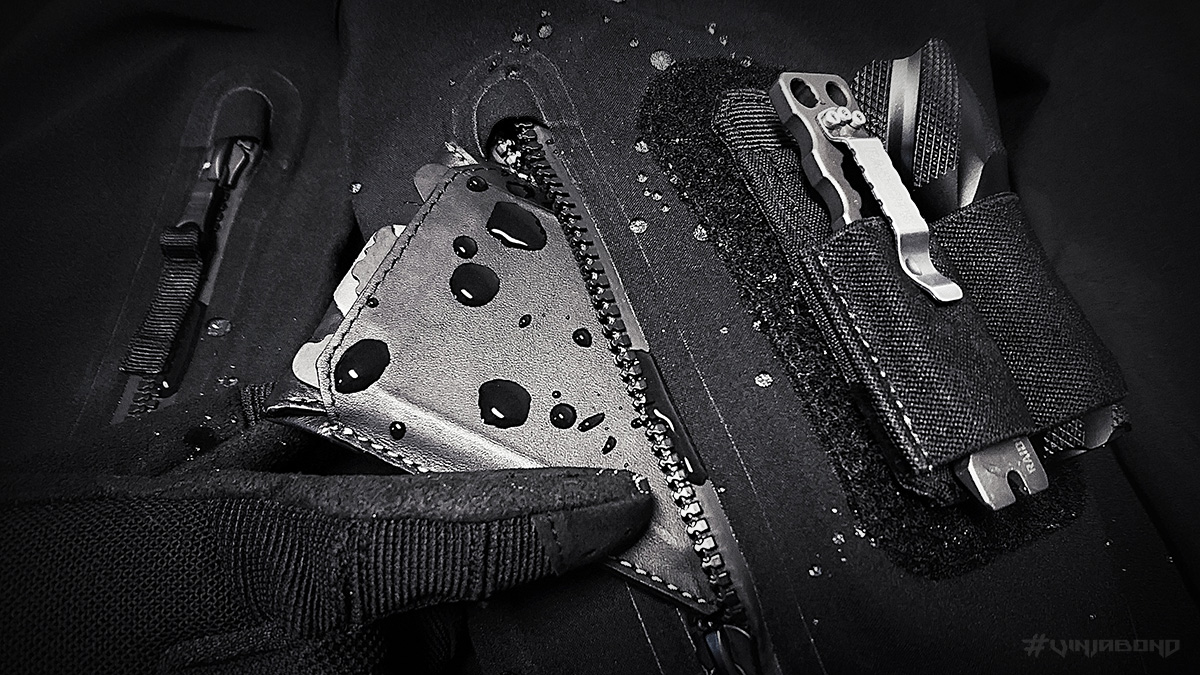 Donning my Stealth Hoodie LT while vagabonding, I’m ever-seeking people with similar jackets to compare it to and have found Arc’teryx is on the same level whereas The North Face falls discernibly behind.

Imitation is the greatest form of flattery and when it comes to products, it means you’ve made it.

If you ask 100 random people off the street what “Triple Aught Design” is, maybe 1 will know what “Triple Aught” means but none will know the company. But if you ask about “The North Face”, almost all of them will think of it as the brand, most not even knowing what it’s actually named from – a side of Mount Everest.

And for that reason their merchandise is extensively counterfeited and illegally duplicated.

Which makes it all the more impressive for a comparatively obscure company like Triple Aught Design to also have shysters selling knockoffs.

The TAD Stealth Hoodie LT Jacket is a softshell. It has no insulation as it’s designed for layering. This gives it the potential use for all 4 seasons ideal for variable climates around the world while making it easy to pack and carry to and from those places.

I can wear it over a basic t-shirt for rainy summer nights or layered with a Quantum Half-Zip base and a Flux Hoodie sweater (shown above) for snowy winter days.

I had some concern about a softshell being able to be truly waterproof as that’s what hardshell jackets are for. But even then, short of a rubber raincoat, water will eventually seep through the best of jackets.

However, the Stealth Hoodie LT is made from a “Bionic Climate Membrane” called c_change™ (more on this below) that is supposed to be “permanently wind and waterproof” while being breathable.

While I haven’t had the particular fortune of misfortune of being caught in the pouring rain for more than 2 hours with this jacket, it kept me completely dry and cool.

As for the wind, it’s barely different than being in a car with the window rolled up, you can hear but can’t feel it, especially with that enveloping ergonomic hood.

The “LT” in Stealth Hoodie LT is to signify that it’s lightweight and minimalistic. It certainly is but full of premium features while keeping it streamlined.

A total of 6 pockets are strategically placed to maximize freedom of movement during high-activity and the convenience of natural accessibility.

This means the typically belly placed pockets are in the chest areas (w/ d-rings), bicep level pockets with optional velcro attachment points (also w/ d-rings), a single lower forearm pocket on the left sleeve and a large “hunters” pocket on the lower back.

All utilizing the water deflecting and nigh sealing RIRI zipper system, keeping my gear as dry as my body.

Being a Triple Aught Design creation, the attention to detail with the Stealth Hoodie LT is unsurprisingly unparallelled, despite its minimal direction.

Due to the high breathability combined with heat retention adapted to the changing conditions, c_change™ always ensures a pleasant body climate.

The c_change™ membrane of the jacket is a situationally adaptive textile that responds to the wearer. If the body starts to overheat and moisture is detected, the micro structures of the membrane open up – venting excess heat out of the jacket. Effectively cooling the wearer.

If the c_change™ detects too little moisture within the jacket (due to dropping temperatures) the same micro structures of the membrane closes up – trapping and retaining internal heat. Effectively warming the wearer.

It’s like an automatic climate control system that happens to feel euphoric on bare skin, almost like silk.

It’s meaningless to say the Stealth Hoodie LT “is the best performance jacket ever created” because a “best” designation is impossible to give to any piece of apparel.

However, it is one of the finest available and personally the single most compatible and desirable jacket.