This is a guide on how to travel with knives and certain non-permissive tools on your person and in your gear kit while traveling the world.

“A knife is more than just a potential weapon, it’s a tool for survival and utility.“ -John Cain

I’ve just taken my 428th flight through half of the world and have had bladed equipment as part of my everyday carry for every destination, this is how:

Knife ownership / possession laws in the USA are notoriously difficult to decipher from state to state and from blade length, type and purpose. This is no different to the rest of the world, with the exception of the few countries that completely ban civilian knife carry / possession.

Even when laws are specific and explicitly stated, they tend to be interpreted in not so precise ways because of the confusing nature of knife terminology and the person interpreting said laws.

So there are no universal knife laws, but there is a general concept of carrying knives while traveling you can follow as a guideline:

As mentioned, some countries do not allow civilians to carry or even possess knives of any kind, so these laws are pretty clear.

Again, it can be difficult to figure out every knife law for every country, and even the internet hardly helps in this regard. Just remember, better safe than sorry – legally speaking that is.

In the USA and most countries, knives are acceptable items if checked. There is generally no limit to how many knives you can pack, but a duffle bag full of only weapons will cause problems.

Even if your arriving country bans civilians from public knife carry, you will not be be arrested or get into any trouble upon landing (assuming your status is clear). Within these countries, keep your knives in your bag, not on your person.

There are some countries that will confiscate your knives from your checked baggage after you claim it. This is extremely rare and has happened to me only once:

Arriving at Incheon Airport in South Korea, my checked bag had a strange blinking device attached to the strap. When I got close to the Customs area, the device set off an alarm and I was told to go to security.

My bag was flagged and tagged because it had a tactical knife in it:

Whoever flagged my bag didn’t remove the Exilis Knife, they just tagged it so that I would have to stop by security after landing.

The security agent told me that the knife is illegal in Korea and he must confiscate it, but I’m not in any trouble. Being an expensive high-end knife, I worked my magic and he let me keep it.

The point is, even though this particular knife was illegal and the authorities knew about it, as a foreigner in a foreign country just landing, I was not in any sort of trouble.

It helps to not make it look like your trying to conceal anything in your checked baggage.

A loophole on how to travel with knives is shipping them to your destination. It’s a relatively safe practice, including across international borders.

Be reasonable when packaging them. Don’t just ship a box full of weapons, but mixed with innocuous items so that your package doesn’t get flagged for being menacing.

Never put your knives inside or with their original (purchase) box as not to make it look like it’s commercial – to avoid taxing and delays.

The Vagabond Survival Prepping Method may be useful as well.

Knives, as in anything that is specifically made to cut, is not allowed to be carried on board on all and every commercial flight by the general public. This is not just the TSA but airport authorities worldwide.

This isn’t breaking news, but it’s worth repeating.

I’ve written about why I won’t disclose how to get knives and other prohibited items passed airport security and I won’t do that now.

I will tell you, don’t. Don’t try your luck or attempt to trick the machines or the agents. It’s not worth it. At the very least you’ll have the knife confiscated and at worst, you can get detained to even arrested.

On short trips when I’m packing light with nothing to check, I do carry a specialized blade in my carry-on:

As a Pro Member, contact me for more details on this.

Remember, you will not need a knife while on a flight. I know you’ll feel naked without your favorite blade, but put it in your checked baggage.

The problem with checked baggage is the possibility of theft or baggage loss. Whether it’s a laptop, jewelry or in this case, high-end knives.

But there is an almost foolproof method of transporting most types of knives through checked baggage to remedy this problem:

This method is primarily for folding and mechanical knives – knives that can be disassembled.

First, disassemble the knife and only put the blade in your checked baggage and the handles / hardware in your carry-on… That’s it.

It’s highly unlikely that even a knife aficionado airport staff would steal only the blade of a $500 knife.

This has served me well over the years and is much more reliable and cheaper than shipping them.

Regardless of the local laws, I am almost always equipped with a blade of some sort. But I suggest you always abide by the laws.

Even if civilian knife carry is legal where you are, never visibly equip them. This includes the knife clip and imprinting. Carry them completely hidden inside your pocket or IWB (inside waistband).

Trust me, it’s better when people don’t think you have a weapon, especially when you’re a foreigner in a strange land. 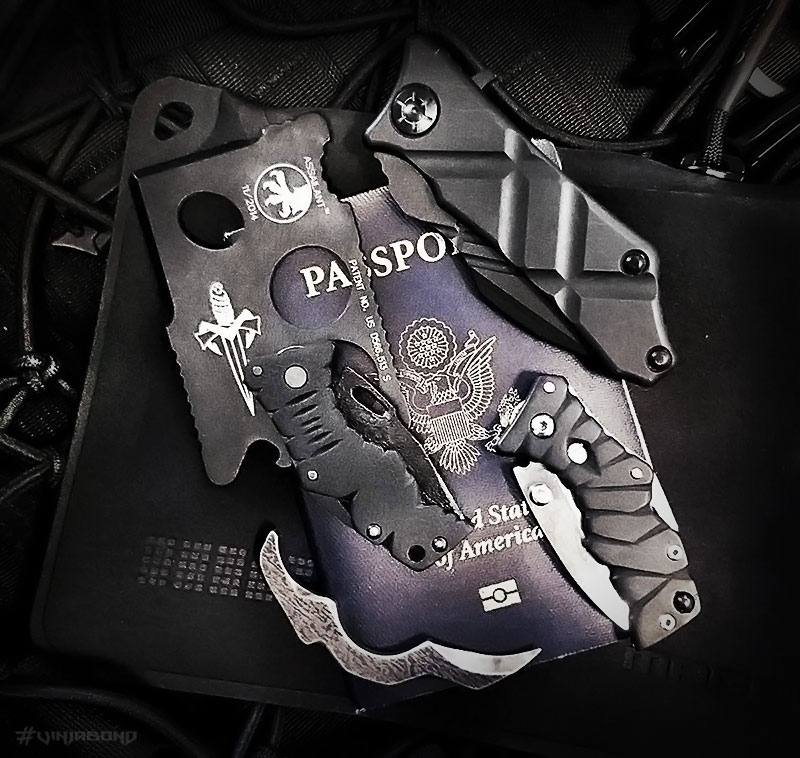 How to Travel With Knives ///