Always Bring a Weapon to The Bathroom

It may seem like it but never assume the bathroom is a safe place. It’s a false haven, a potential cage where you’re at your most vulnerable.

“Security is freedom from, or resilience against, potential harm or other unwanted coercive change from external forces.”

Showering, shitting or pissing, those moments of personal time gives you an illogical feeling of safety and security while the door is locked.

As if the rest of the world disappears and it’s just you, the box and your business. But it’s more like you volunteeringly locked yourself in a cage, a death trap.

Whether you’re at home or on a mission, in a dodgey hotel room or out in the wilderness going to the “bathroom”, what if there’s an intruder?

You’re in a small confined space with no exit strategy viability with your pants down, soaking wet or with your thing out. It’s a security nightmare.

Do you know how many OPS pivoted on a subject going to the bathroom? Many. Everyone needs to go.

Bathroom breaks are gaps in security, or as we like to call it, a “shift change” of situational awareness.

Because it really is like a personnel change, which is always a momentary weakness in security implementation. And it’s also a negative or diverting shift in personal alertness and proximity focus.

As an operator, law enforcement officer or any defense-conscious person, imagine not having your weapons while you’re out. Highly unlikely, right?

Shit can go down at any time, anywhere, that’s why.

That includes the goddam bathroom.

So it’s baffling when I see professionals taking off their duty belt or systematically disarm just to go to the bathroom during an OP or on the verge of combat.

It’s the same for places and scenarios where violence is much less inducive, like relaxing at home.

As for myself living as an ordinary nomadic civilian, I don’t bring a firearm or even a knife to the bathroom. Instead I equip something more convenient, concealable, covert and carry-friendly:

A specialized and uniquely ergonomic carbon fiber knife. Made by me, with my hands and specifically for my hands. It’s as compact as possible while retaining its viability in a tactical capacity. 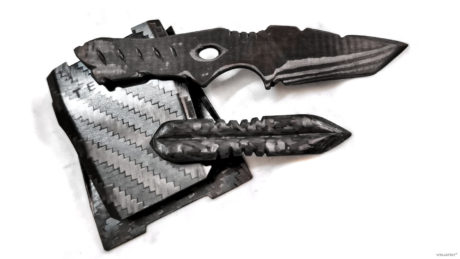 Portions of the double edged blade is designed to break off and splinter inside a target’s body, if necessary. Or as a typical lapel dagger stabbing tool.

This device in certain instances can withstand the scrutiny of body searches, x-ray scans and metal detection. However, for the purposes of “going to the bathroom”, its dynamic carry / deployment implementation is why it’s an optimal choice.

If you’re the type to have a firearm in the house for the defense of home invasions, then you best have a piece in the bathroom in place or bring it with you when you do go in. Not locked in a safe or the bedroom drawer.

Incidents won’t necessarily occur at your convenience and a tool of defense is useless when stowed in another room with an assailant in-between.

Other than while you’re fast asleep, using the bathroom is when you’re at your most vulnerable.

[The featured photo was taken in a cliff bathroom off of the Hai Van Pass in central Vietnam.]