I’ve stayed more nights at hotels and other accommodations than at “home” in the last decade and these are the steps I take to never leave anything behind.

It’s liberating to have all your life necessities in a bag or 2 as is the vagabonding way of living out of a backpack. This freedom comes with an increased responsibility for your belongings like when checking out of a hotel.

Making yourself at home, unpacking and relaxing in a strange but private space to temporarily call your own. This naturally puts you in a laid back state, sprawling your gear and clothes everywhere.

If not careful, the most organized and vigilant of vagabonds can lose or leave something at a hotel and only remember long after checking out.

And so, these are the 3 simple things I always do to prevent that from ever happening again:

Place all your bags and subsequently unpacked items in the same general location of your hotel room. Don’t spread everything out and never use the drawers or closets. Have it all in an organized pile.

My go-to spot is an entire side of the bed (excluding twin beds). Desks, couches or even the floor is fine, as long as it’s all in the same confined area.

For starters, you should be compartmentalizing internally by using packing cubes. Unpack only exactly what you’ll use during your stay. So if for just 1 night, then the shirt, underwear, socks and pants for the next day. Keep everything else packed.

Toiletries should be kept in the bathroom and footwear should be right by the exit door to avoid confusion. These are the only exceptions.

This is a constant state of passive repacking. If you need to take something out of your bag, then put it back exactly in the same position after use. Never just keep it on the side but repack as soon as the item is no longer needed.

For example: if you need to charge your phone, put the cable away as soon as it’s charged. 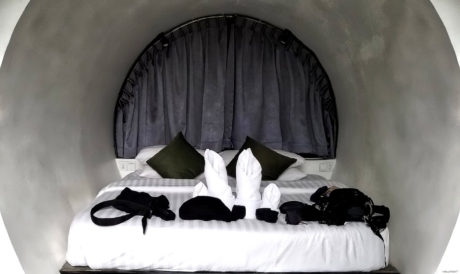 An additional measure I take to secure my gear is to pack fully or close to it, the night before I’m supposed to checkout. Rush packing in the morning trying to beat the clock is a sure way to lose your shit.