This is a part of a series of posts about urban survival. Guides, skills, tips and gear for travel, crises and everyday life. – view all survivalist posts

“Survival in any form for any environment is an act of prevention and or recovery.“

The core concept of urban survival differs from wilderness survival in that the former is usually an ever-active state of mind for both normal and emergency situations alike.

Unlike wilderness survival, urban tactics is equally effective for enhancing everyday life, such as handling your walking money; aka “spending money”, “pocket money”, “going out money” and “carry cash”. The cash you have on your person (wallet, pocket, bag) incidentally or to use for the day / event.

The idea is simple, separate where you put your cash in at least 2 different locations on your person. So some of your cash in your wallet / money clip / pocket and the rest in another pocket or stash location (inside a sock or other hidden spot).

The purpose is for both emergencies and normal use.

As per emergencies, there may come a time you’ll be mugged and the only course of action is to give the assailant “something”. In the vein of the “decoy wallet” concept, the point is to appease the mugger by giving them something you can part with, such as a small amount of your cash but not all of it. 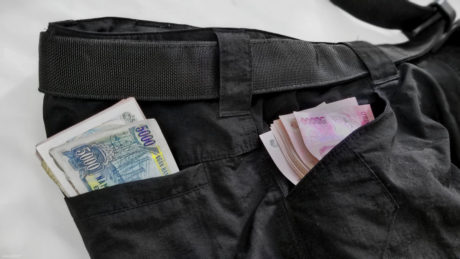 There is also a relatively common scam that official but corrupt police officers do in poorer countries. Visa passport scams where they would randomly check forgieners’ passports on the street and demand a fine for a “faulty” visa. Another scam is pulling over foreigners while driving any motorized vehicle and demand a fee for driving without an international license or without a helmet.

While the latter scam is sometimes a legitimate move, it rarely is and both are essentially bribes to let you off the hook, even though no crime was committed. The cop typically asks for a high but logical cash amount, with no actual ticket. The foreigner would then give them the bribe. But if you seemingly only have a small amount of cash on your person, the cop would just take that and go.

You can’t always talk your way of this type of situation so it’s sometimes best to take that small hit while keeping your other cash secure.

I personally split my carry cash down the middle. Half of it goes in my “wallet pocket” along with my DAKA card sleeve and the rest simply goes to another pocket or in my bag.

Cash separation should also be implemented within your bag. If you have a stack of cash, distribute them in multiple places by stashing them in both obvious and hidden spots throughout.

Same purpose applies. But furthermore, it creates a simple but effective security measure in case of a thief rummaging through your bags.

If they find your entire cash cache, your loss is great. If they find a small bit of your cash in an obvious location, they may be appeased and move on.

[The featured photo was taken in New York City.]