If Porsche and Jeep collaborated to make footwear and the LALO Zodiac Recon AT was the end result, it would be equal parts 911 and Wrangler.

The Zodiac Recon AT is an over-sized, rugged running shoe with lightweight component construction and responsive geometry. It provides a quick and responsive ride for off road terrain. -LALO Tactical

As a vagabond perpetually traveling as a lifestyle around the world, my carry capacity is limited and therefore I made a rule to never equip more than a single pair of footwear.

However, when LALO’s latest sneakers were announced, I had to have them. I broke my own rule, throwing out other things in my packing list to make space for these. I have no regrets after 5 months.

My other, main shoes are also made by LALO, the Shadow Amphibian Boot. My fave footwear of all time.

I said it “Fits like basketball sneakers, moves like running shoes and constructed like couture armor.” The Zodiac Recon AT’s share much of the same features. Except that these are, well, even more comfortable being that they’re actual sneakers. 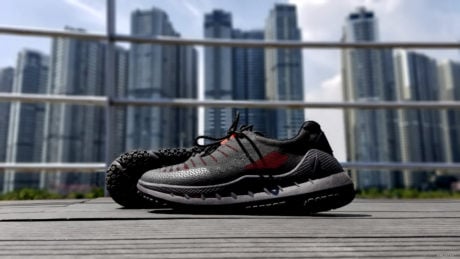 Running shoes should be the most comfortable and lightest of active / athletic shoes, and these certainly are. They weigh almost nothing and wears like a fitted sock. But unlike even the most advanced Nike offerings, these are rugged and designed to take on off-road conditions – including the elements. 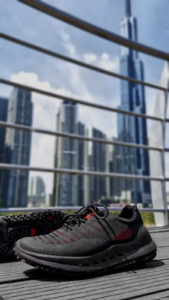 As with the Shadow Amphibian’s, these also have a water drainage system that passively but effectively gets your feet dry faster than anything out there.

The out-sole is an oversized beast, especially for a running shoe. There’s a sense of traction confidence with every step, no doubt due to its irregular amount of ground contact and the unique treads that’s reminiscent of dirt bike tires. These grab and dig into the terrain your covering almost like cleats.

Also with every step, the construct of the Zodiac Recon AC shoes gives the foot what feels like a tiny but noticeable boost of forward momentum.

I’ve only used these in extremely hot and humid tropical conditions so far but with great satisfaction. Their boots, even being tactical boots, breathe well and maintain exceptional internal climate control, but these sneakers are on another level, expectedly but now definitively after extensive use.

In a sense these are “tactical sneakers”, which is a bit of an oxymoron, but as it turns out they’re a perfect example of footwear fusion.