Experiencing the short but tough above-the-clouds trek up the active volcano of Mount Batur in Indonesia was worth a lifetime of adventures.

The volcano is still active today as Balinese all over the island who still remember the great eruption of 1917 will testify. It claimed thousands of lives and destroyed hundreds of temples… “The year when the world shook”.

As a vagabond and world traveler, I frequently get asked “What’s your favorite country?”. I don’t have one, yet. But one of my favorite cities is Bali.

I’ve been there 5 different times and have finally trekked Mount Batur. Now it’s personally the most spectacular place I’ve been to, up there with Cambodia’s Angkor Wat and Egypt’s The Great Pyramids. 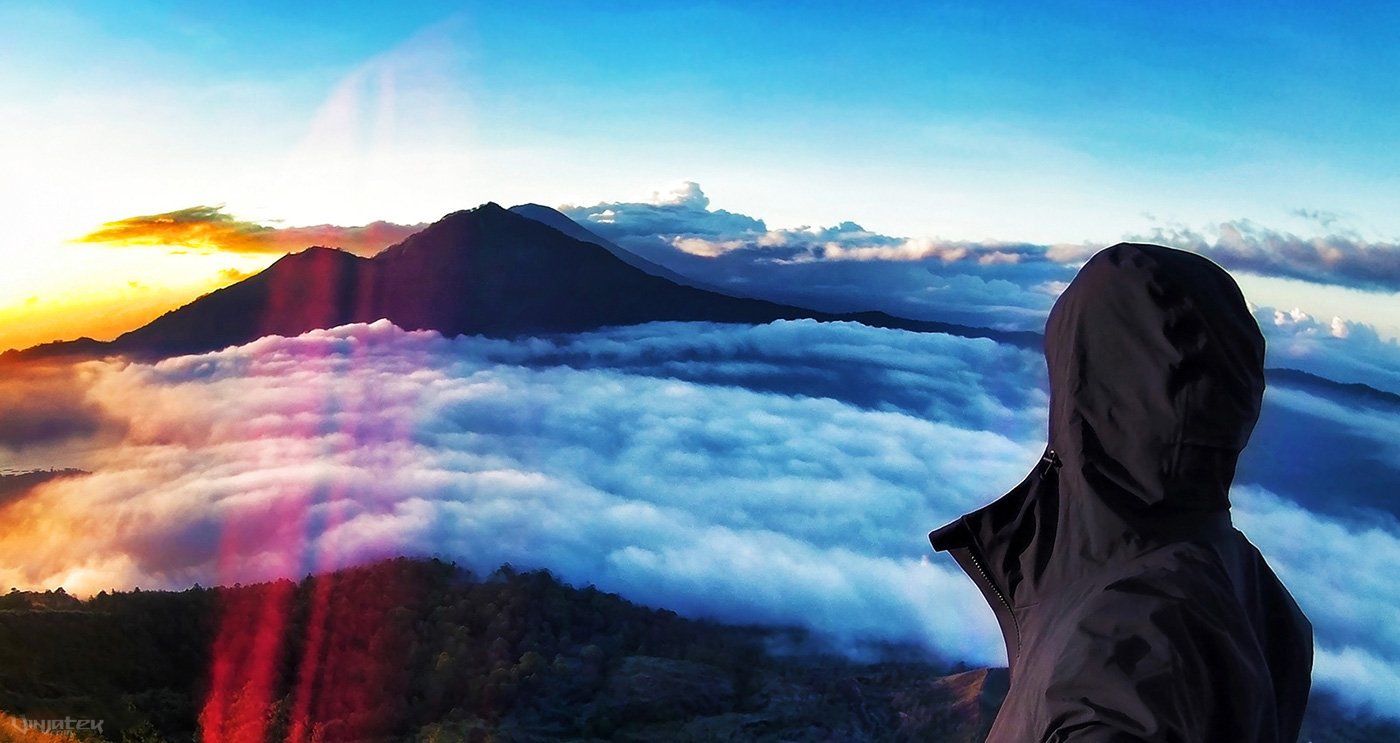 I’m a self proclaimed professional traveler and adventurer, but that doesn’t mean I won’t take guided tours or avoid popular destinations.

So we booked a sunrise Mount Batur tour for $50 a head at a local agency. This includes transportation, breakfast(s) and a local but English-speaking guide.

We were picked up at our villa in Sanur (a quiet neighborhood of Bali) at 2 in the morning and took about an hour and a half to reach the base of the volcano. 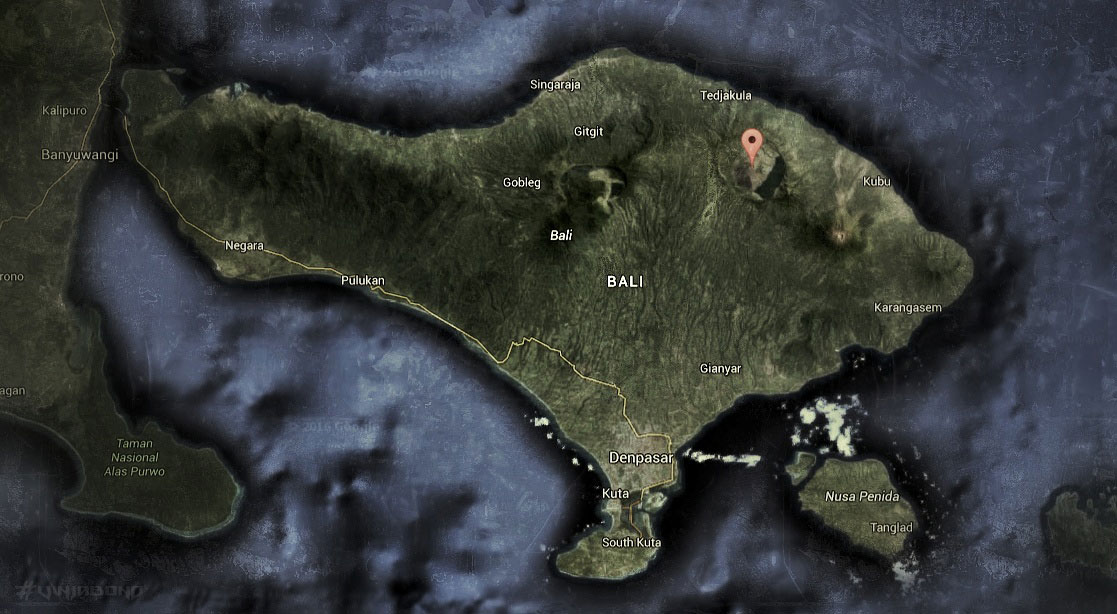 Pitch black and lightly raining with just a few clustered areas of light in view from distant villages, we get out of our van and are greeted by our guide, Jen.

At just 20 years old and weighing no more than 100lbs., we were surprised to hear that she hikes up Mount Batur 6 days a week for work like clockwork.

She hands each of us flashlights but I decline as I have my more powerful SOG Dark Energy torch.

The first 20 minutes is uneventful as it seems like we’re entering into a forest, then suddenly the ground becomes concrete. Worried that this “trek” will be more like a walk on the street, I keep my thoughts to myself and keep moving… and sweating in the Bali heat.

Finally, the path becomes less obvious and more mountainous. But the thunder gets closer.

Most of the way to the peak of Mount Batur is rocky and treacherous, especially with the heavy rain bombarding us. But this I like and wanted.

My Raptor Hoodie Jacket keeps me dry the whole time. I was reluctant to bring this as it hits at least 90 or more degrees everyday in Bali. But as we got closer to the peak and to above the clouds, we may have escaped the rain but the temperature dropped to more than half. 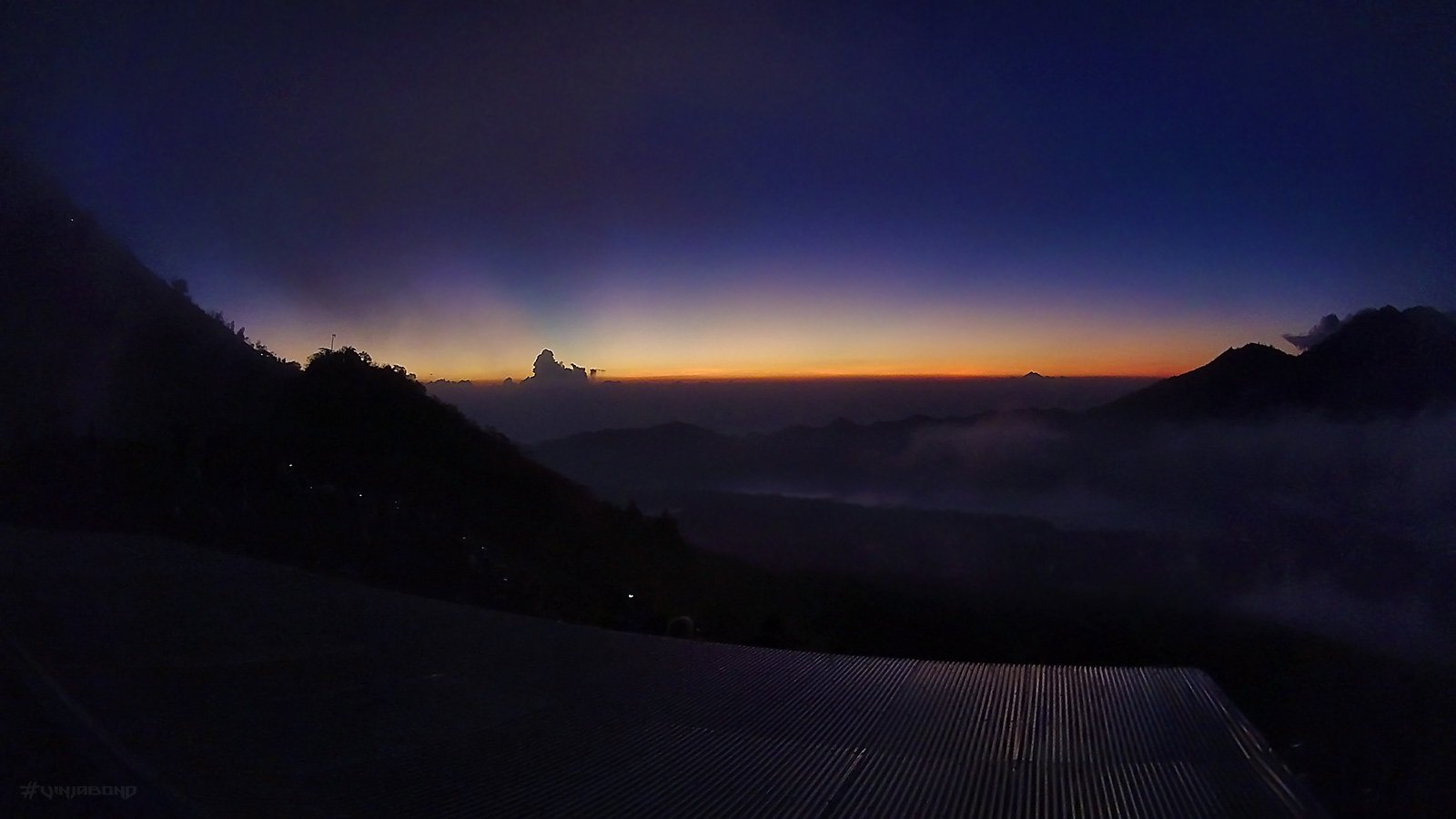 With just seconds away from the sun rising from across the horizon, the sky turns from black to blacker than black shades of blue. I climb to the roof of a cabin and humbly watch our world wake up.

As if a higher being manually adjusted a light dimmer switch quickly upon on the earth, the darkness is snuffed out by the giant floating ball of fire.

Our sun has risen and it is magnificent.

It makes its presence known to Mount Batur and to as far as the eye can see in its golden embrace.

It’s fascinating how sunrises, a most common event that has always and always will occur for as long as the earth and sun harmoniously rotate is so fascinating. 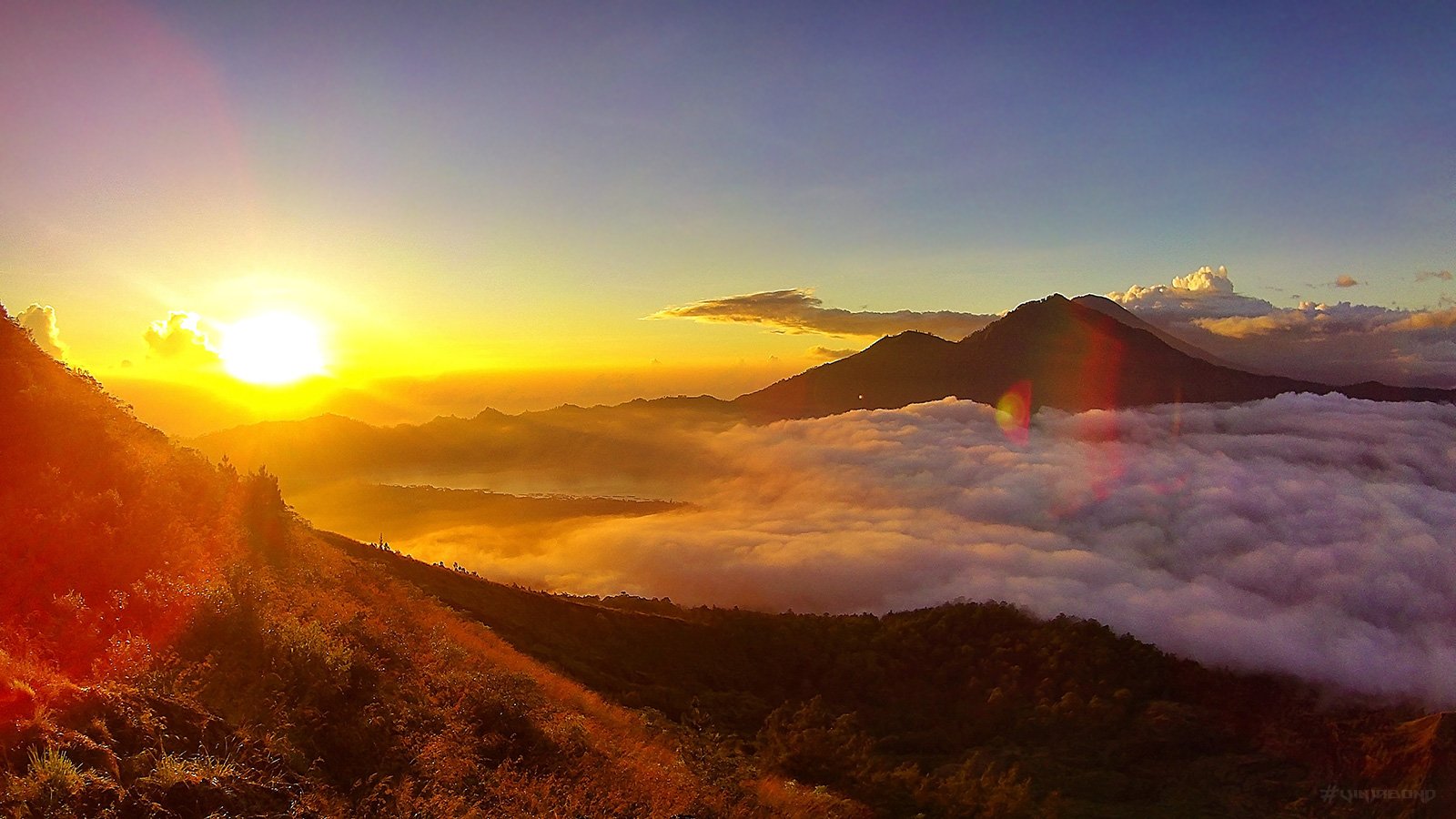 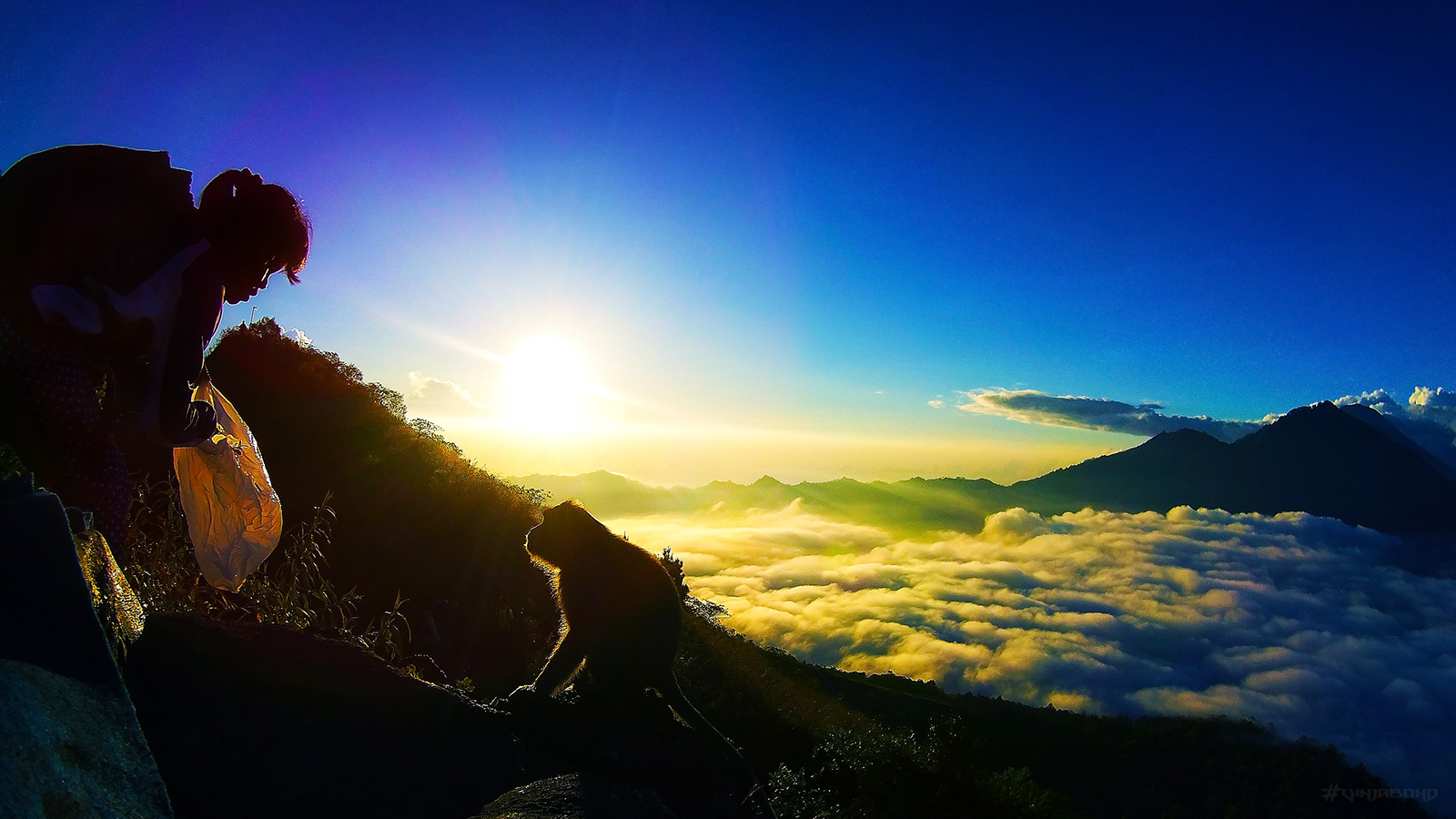 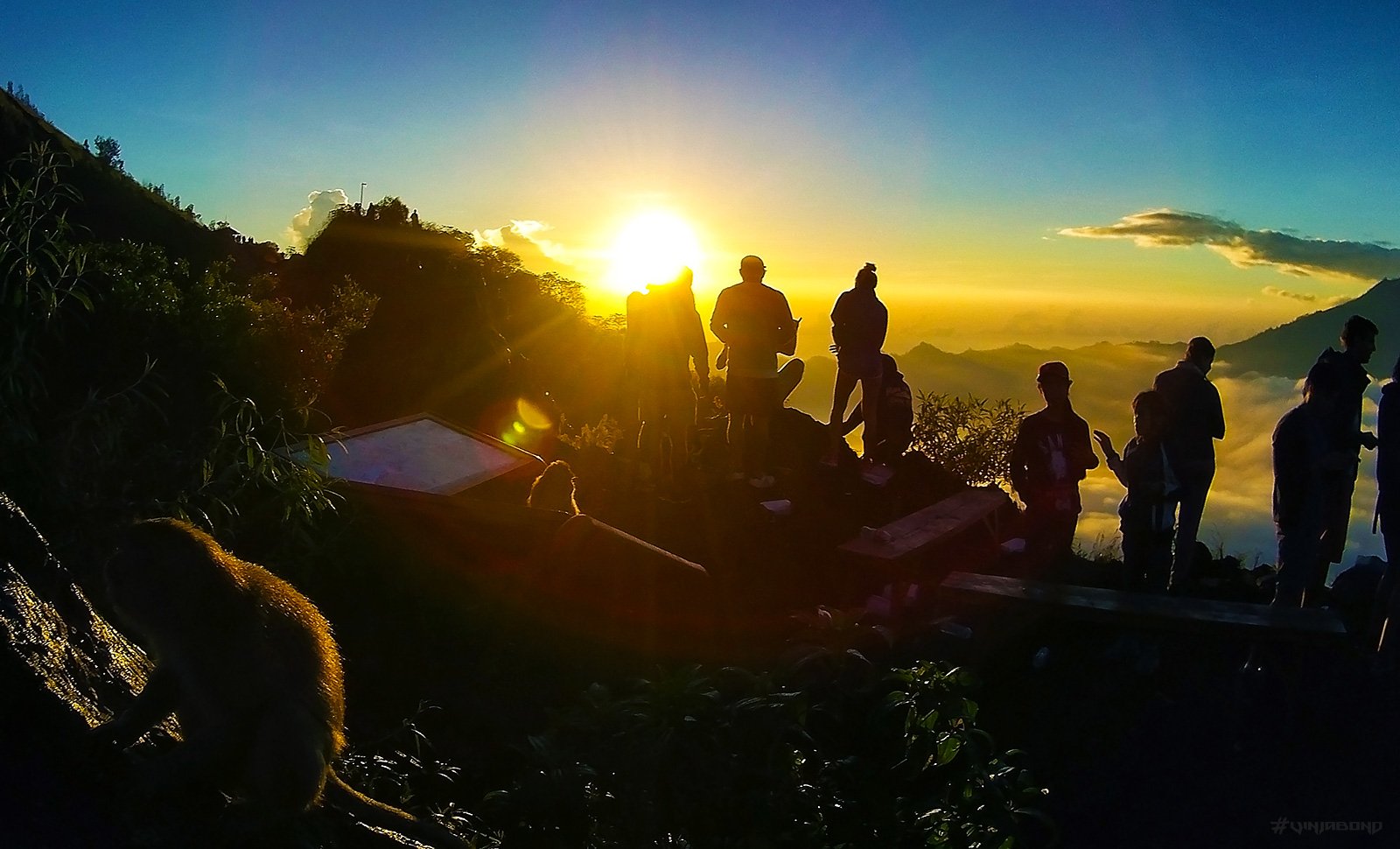 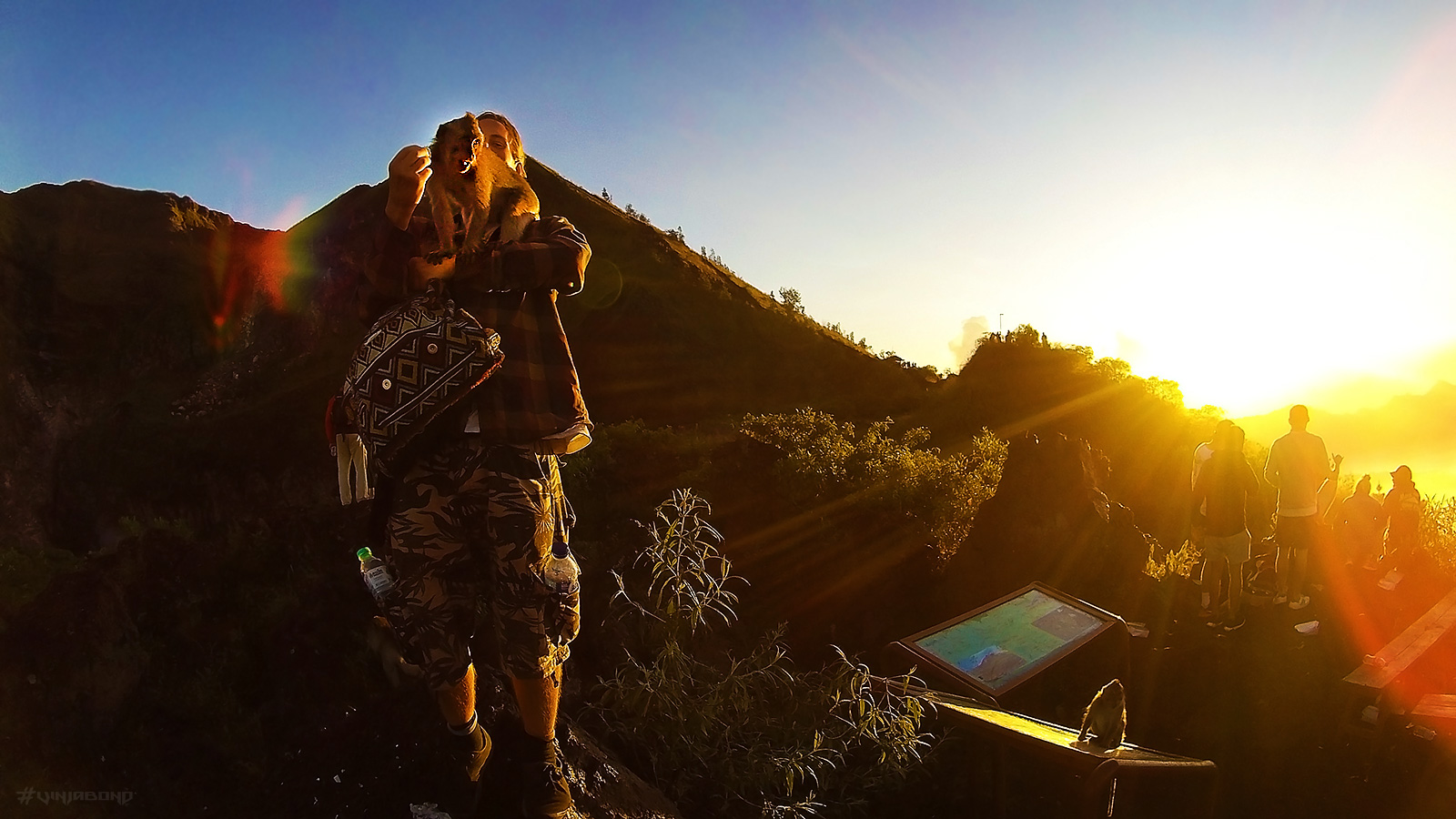 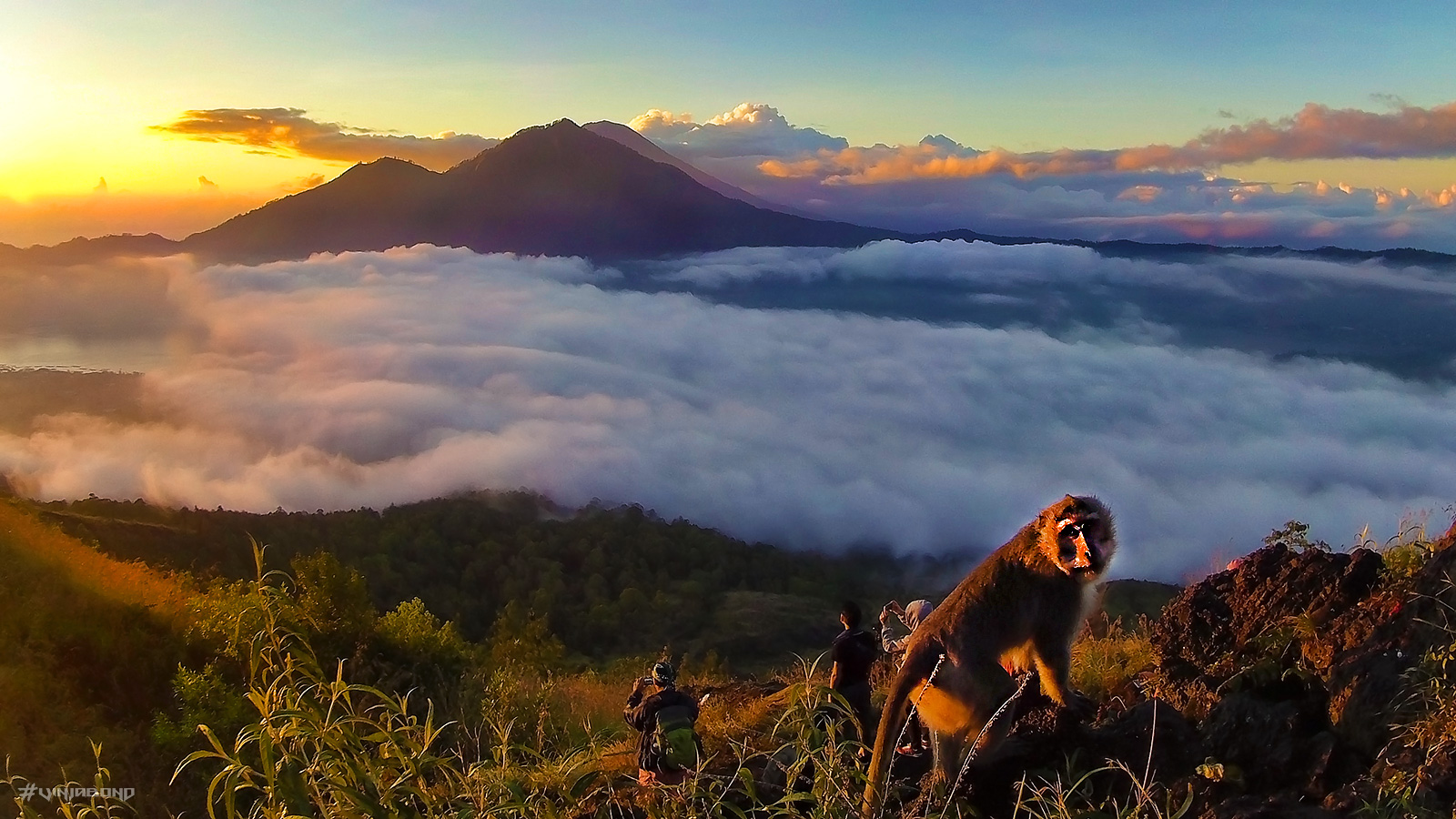 When viewed from the top of Mount Batur and while above the clouds, it’s no ordinary event. The best sunrise I’ve ever witnessed, and I’ve been around.

While admiring in awe of the clearly apparent movement of the sun, I suddenly noticed that everyone’s looking the opposite direction. I turn and I’m in more awe… 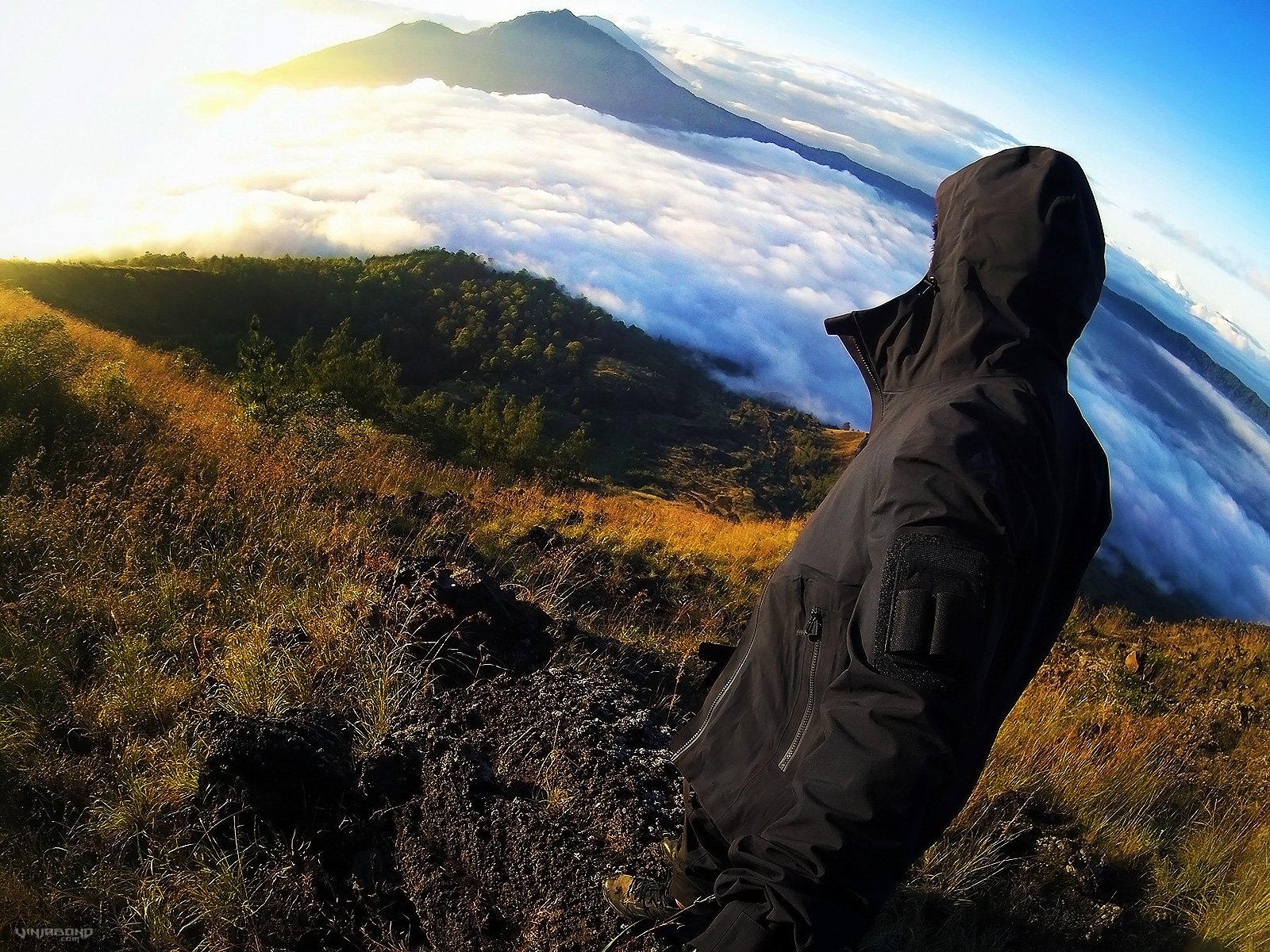 Directly across from the sun is the moon, seconds from setting. As if the sun was chasing the moon away from its territory. I’ve never seen anything like it before.

With the sun warming us up in the 50 something degree climate, we ate our breakfasts; Nutella pancakes, boiled eggs and tea. Then our guide reaches into her pocket and surprises us with something special.

She looks around to see if anyone’s around then presents a perfectly rolled cone spliff. Being doused in the sun’s morning beam, it makes it look like the joint is made out of gold. She sparks it…

After that a bit of chillin’, we move on to the volcano crater. While active, Mount Batur hasn’t erupted since 2000 but random steam and smoke expulsion is ever-present. As well as the extremely high population of mischievous if not friendly monkeys. 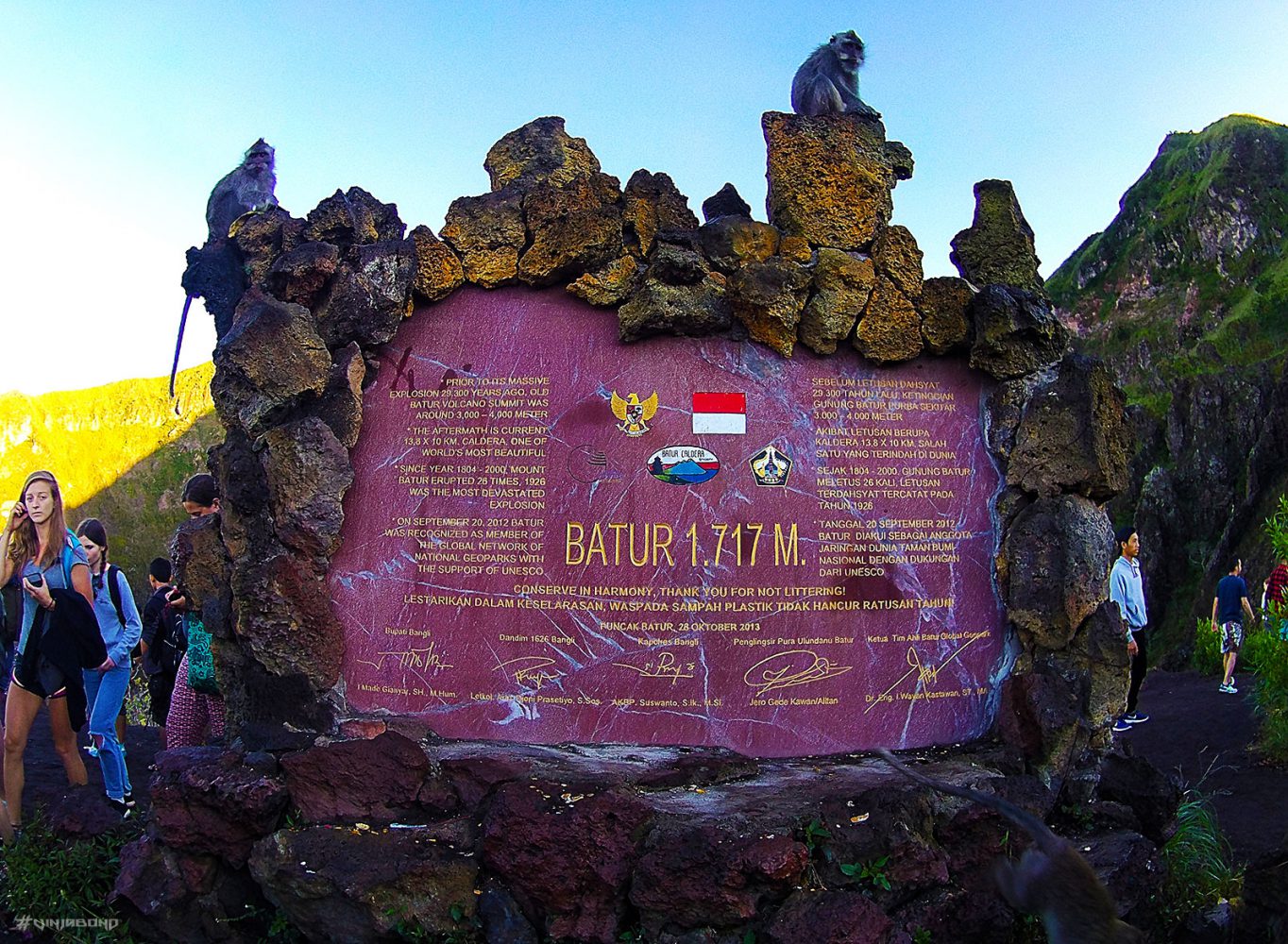 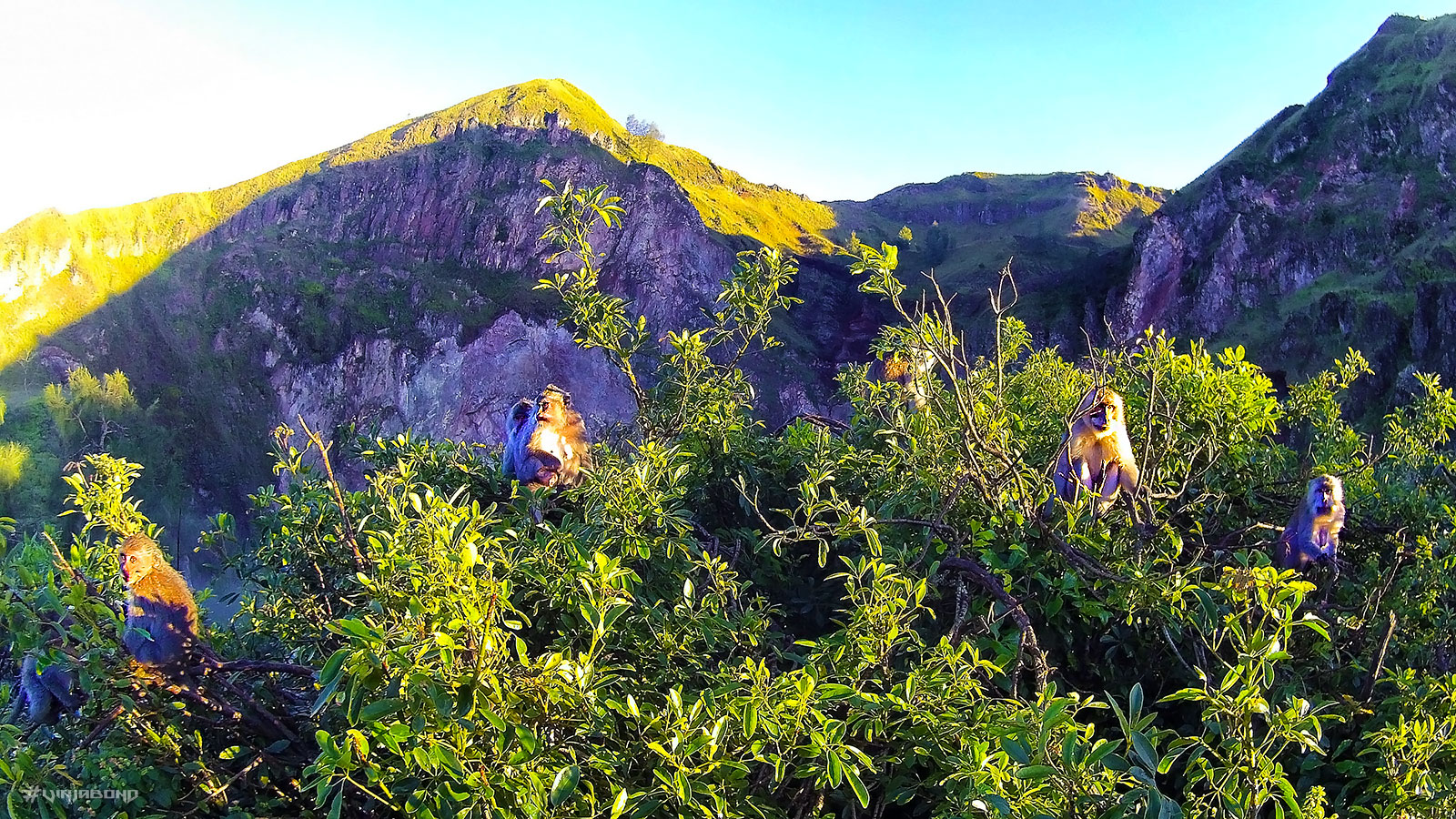 Again, it’s as if the sun’s presence is pushing elements of the sky by force, this time it’s the clouds below us that’s being chased way, unveiling Lake Batur. 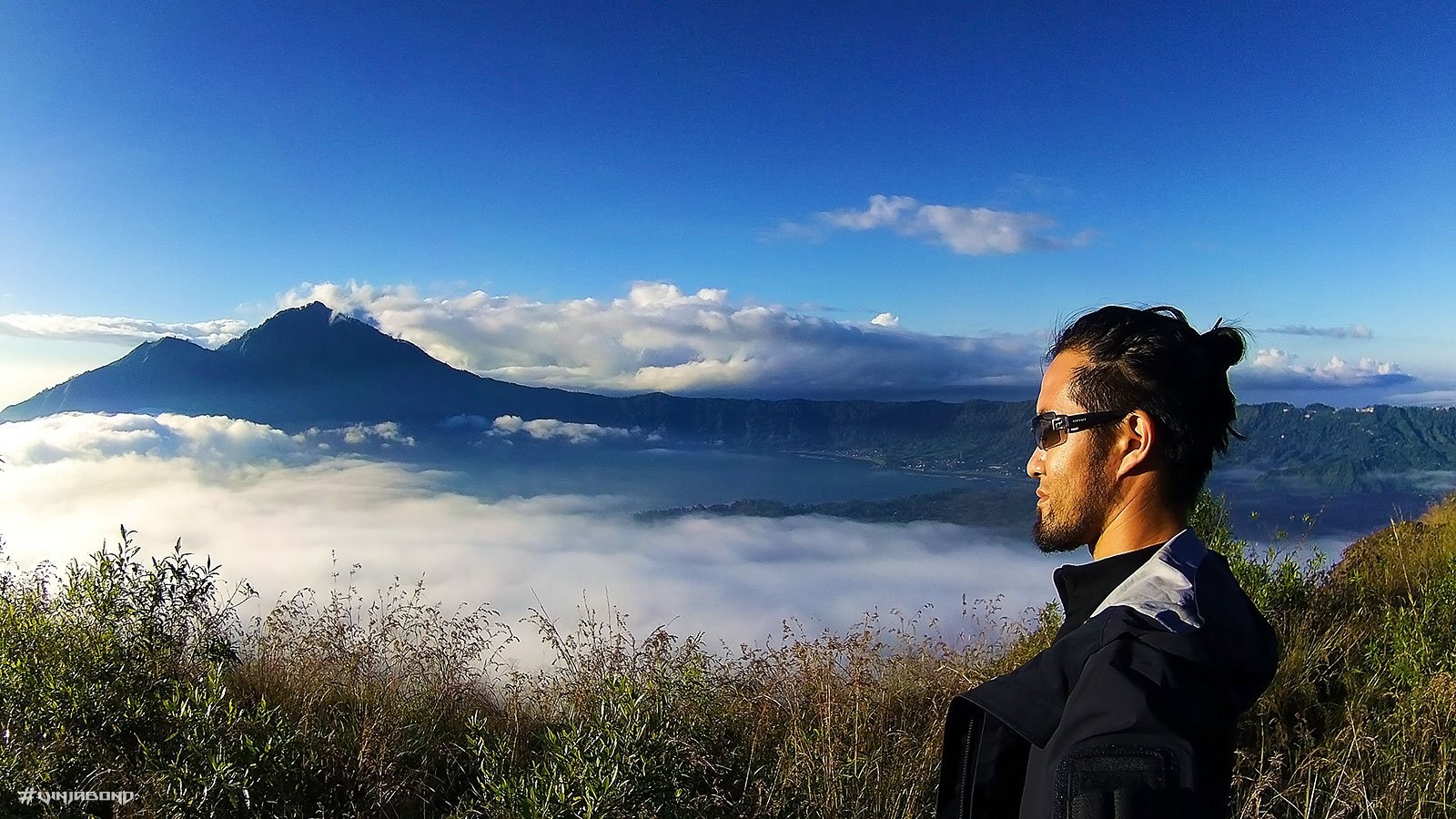 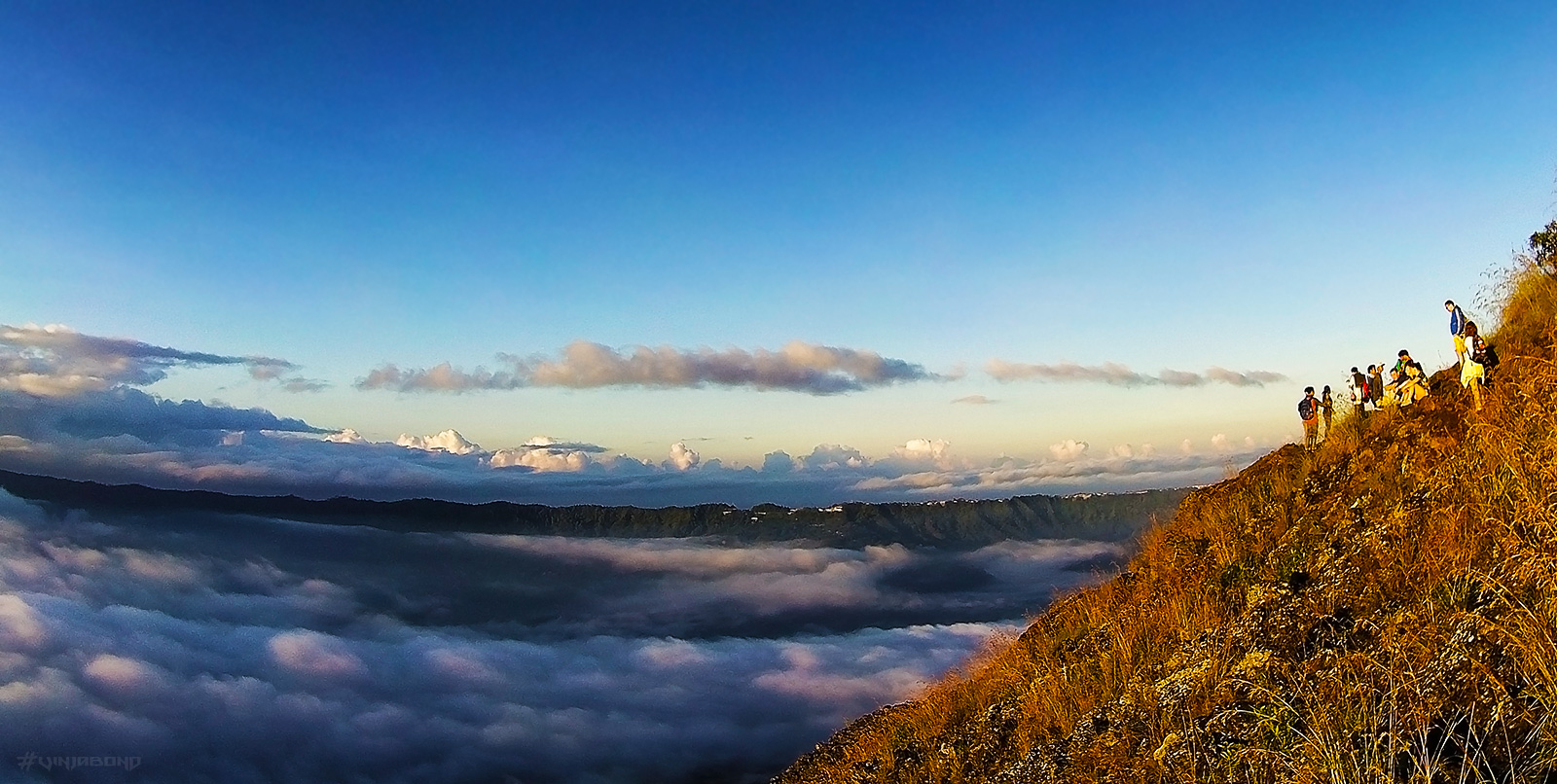 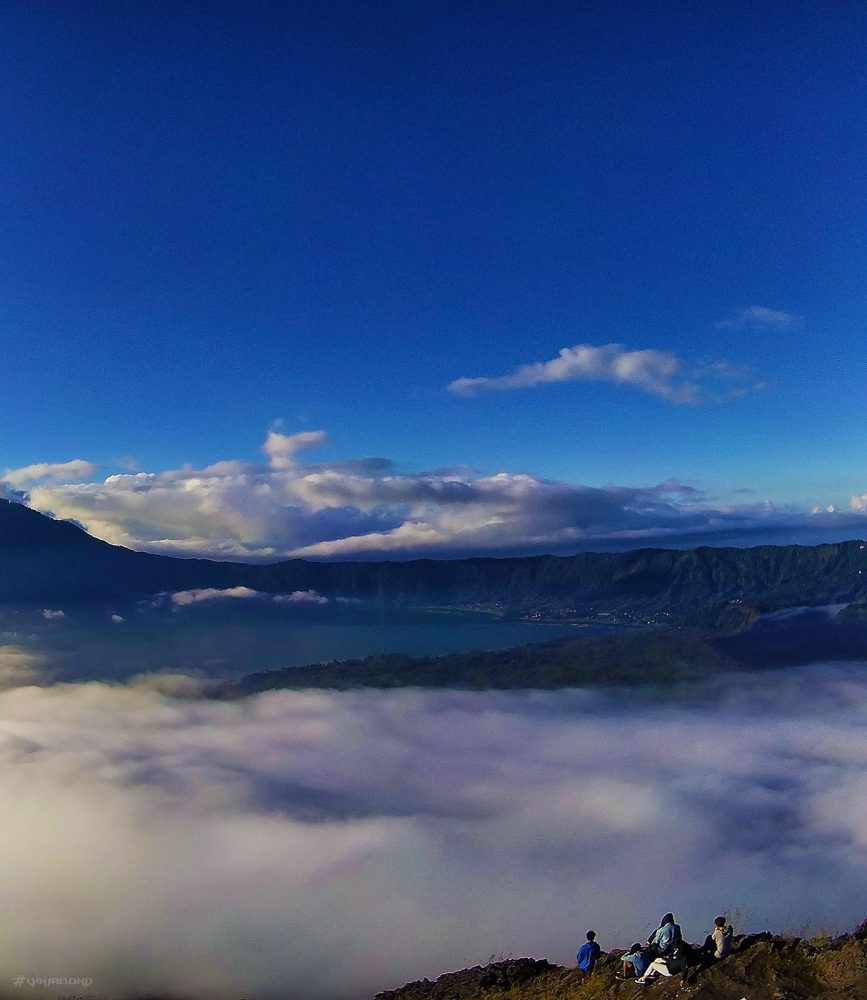 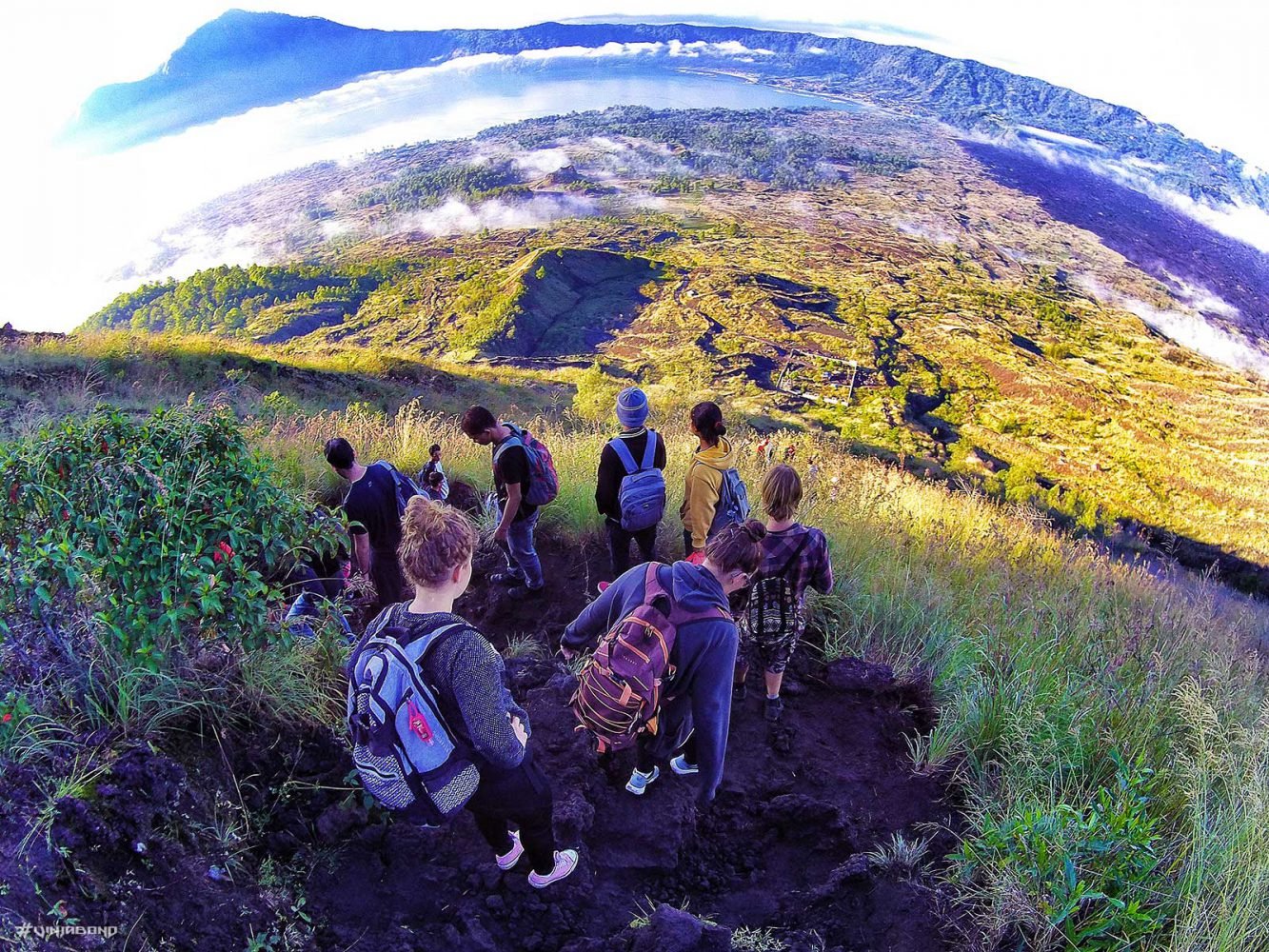 Descending Mount Batur, like any climb, is harder on the way down. The Bali heat rising, our energy fading but we’re treated to spectacular views with every step.

Views we previously passed but were unaware of because of our pitch black ascension hours ago. It’s like experiencing 2 different mountains in 1.

Once we make it to the base, we ate our second breakfast with a nice and nasty warm Bingtang beers. 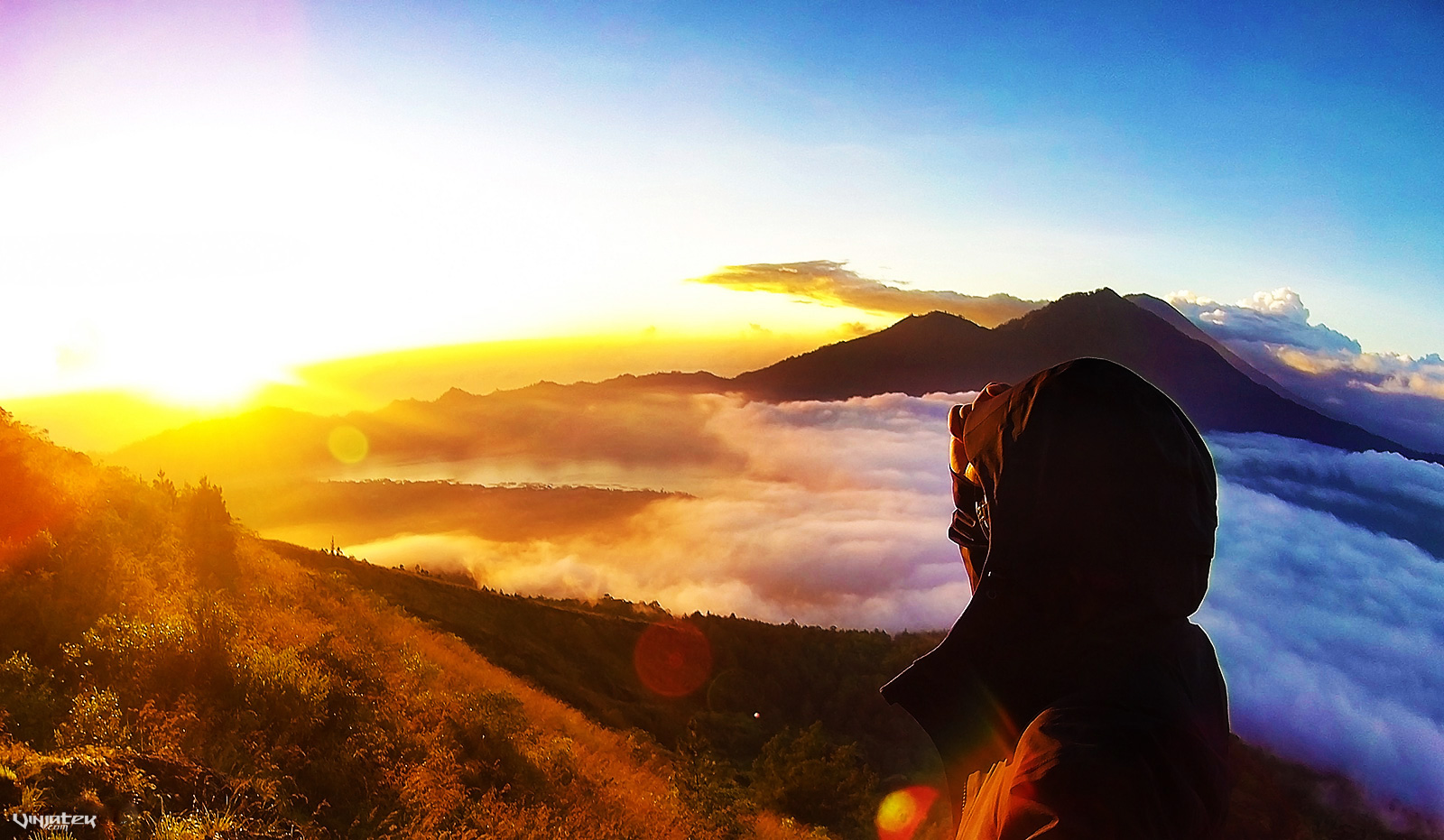 If I could recommend only 1 big thing to do or adventure in Bali, it’s to trek Mount Batur for sunrise.