Weapons of mass penetration need not look like rigid tools of destruction, they can be elegant like apparatuses of pacification. Beautifully tactical.

“All Guardian Tactical USA knives are manufactured in our state of the art facility by the best skilled machinists and assembly technicians in the industry. Employing our award winning critical tolerance testing verification and project completion process.” 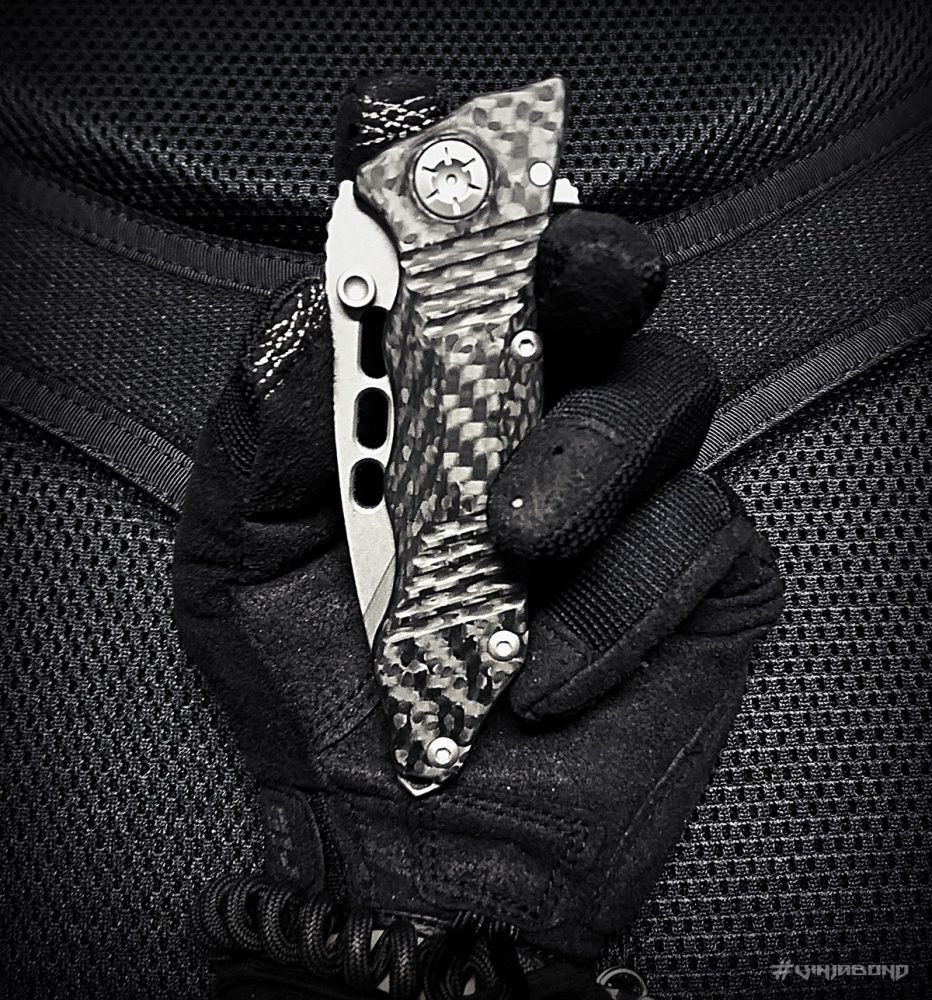 Examining a Guardian Tactical Knife($) is much like watching a high budget movie with cutting edge special effects. The execution of certain fantastical scenes are so impressive and authentic that it makes you wonder if film making technology has plateaued.

The Helix Nano, their latest production and my second, makes me believe that they have all but reached the pinnacle of bladed tactical tool creation.

The only thing else to do is make them with platinum alloy handles, spherical diamond ball bearings, depleted uranium hardware, adamantium equivalent blades and manufacture them in a joint CERN / NASA lab.

So yes, this is a $340 knife. For those unfamiliar with high-end or performance knives, even $34 for a knife may seem steep. But I know knives better than most and I’ll tell ya, it’s very reasonably priced. 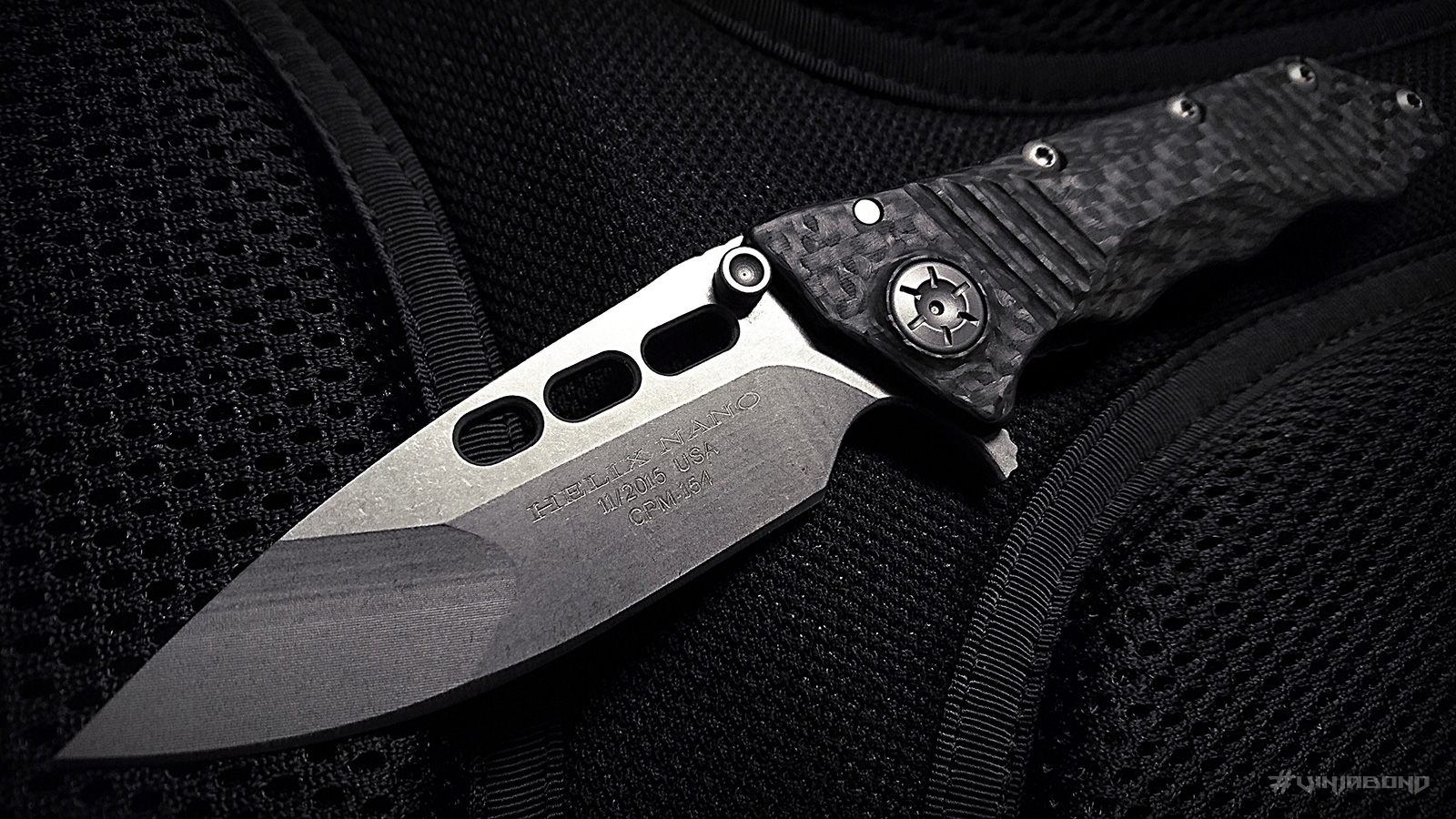 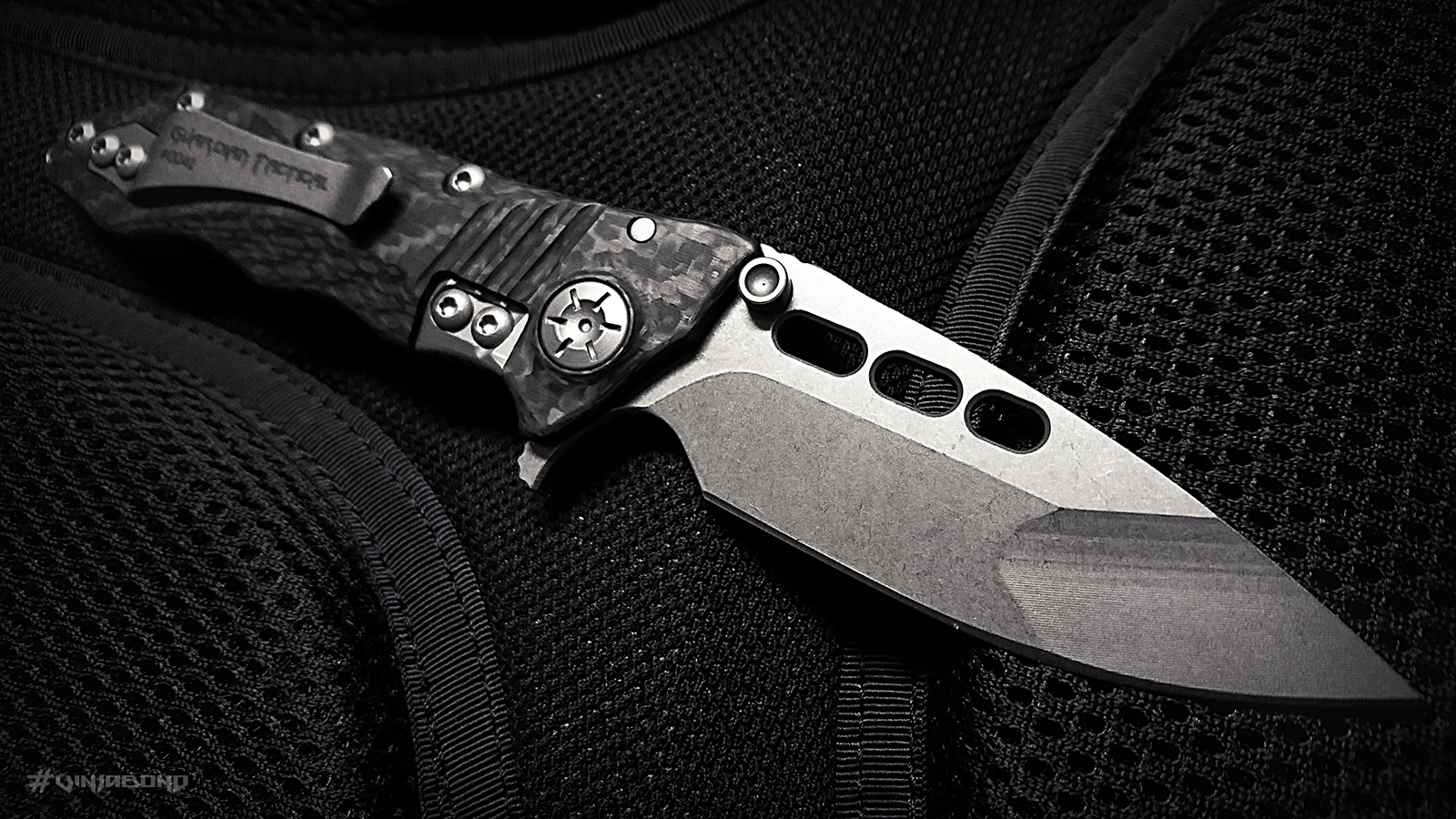 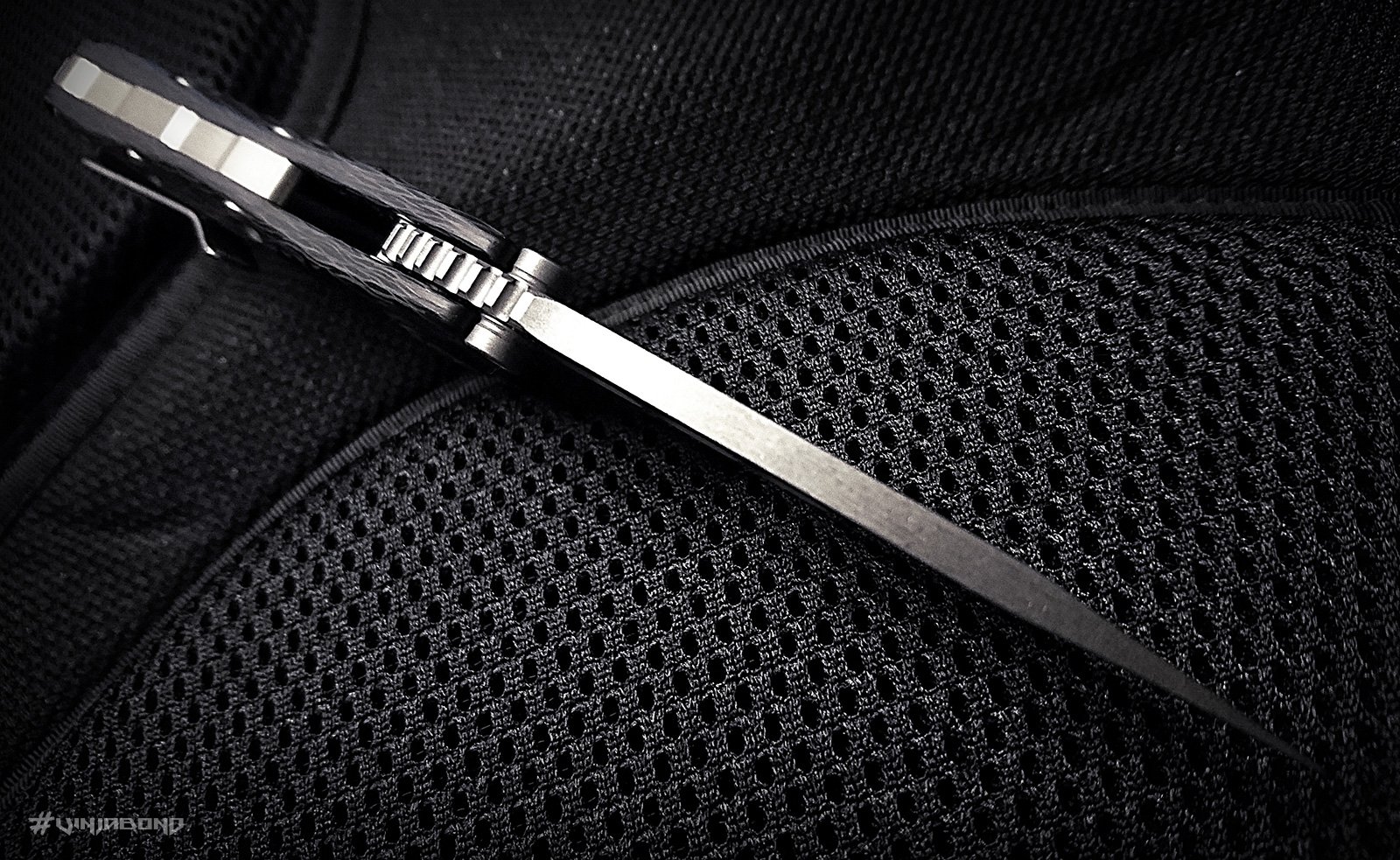 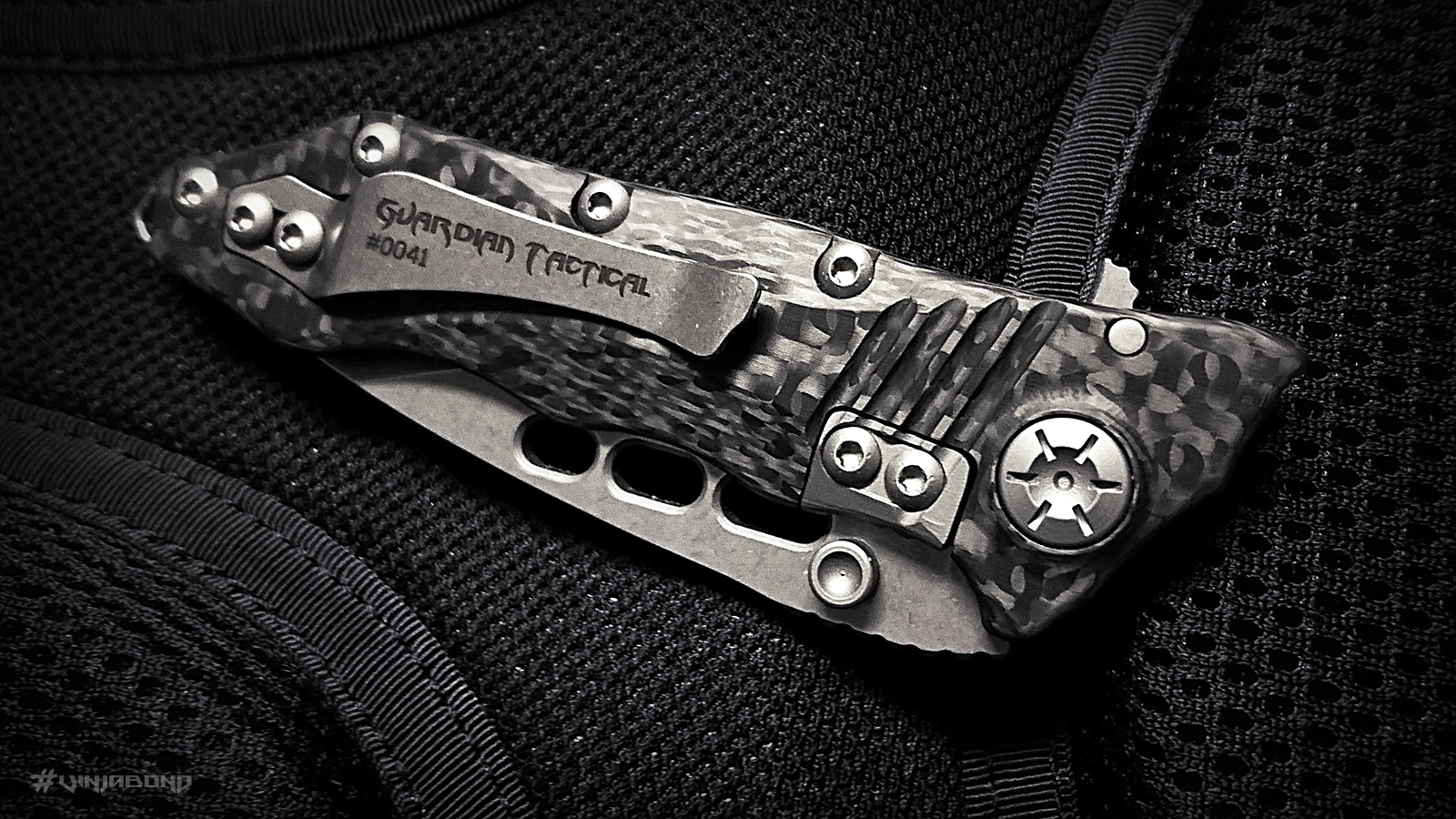 All Guardian Tactical knives have a signature way about them, edgy and stylishly experimental. Different.

They do not make classical knives, they make modern or even pre-futuristic ones as the Helix Nano shows off. Angularly curvaceous and sophisticated detailing that just happens to be aesthetic but actually serves as specific functions and user ergonomics.

The Helix Nano in that regard is inarguable.

The Helix folder embodies the very definition of a tactical combat knife, and to that end it was created.

The most prominently noticeable is the light differentiating carbon fiber scales (handles). Easy on the eyes, easier in the hands and one of the toughest materials in the world. Carved and machined to painful perfection to almost splice with its steel counterparts.

As with their smaller Exilis knife, the blade is Crucible’s CPM-154 steel but at 3 1/4 inches long with a cutting edge of 2.9″. That unusual ratio gives the wielder the reach of a longer knife but still maintaining the (nearly) universal knife carry laws of blades being longer than 3 inches. That subtle difference makes a whole lot of difference to me as a vagabond who travels through many territories around the world.

Unlike the Exilis, the Helix Nano’s blade has a stonewash finish (other options available). But this finish is unlike any other I’ve seen. It’s additionally multi-patterned with grains and lines in such a way it’s as if this metal was grown like a tree, a wood / steel alloy if you will.

My Xperia’s camera is lost to these patterns but I’m sure a blind person with braille experience can feel the blade’s beauty through the finger tips, cuts notwithstanding. Pictures can’t do it justice.

The silhouette of the blade may be a simple drop point but the actual grind of it is quite technical. The forward and tip is a deep hollow grind that graciously but abruptly meets with the rest of the blade (compound grind) which is a contrasting high flat grind.

Despite it being a liner lock, it has a confident feeling of a fixed knife. With 22 individual points of contact (once the blade is open and active), it has absolutely zero “blade play” and an unyielding lockup.

The Guardian Tactical Helix Nano’s($) ceramic ball bearing pivot system in the Exilis deployed the blade via the flipping method with power and finesse. But the Helix Nano’s blade actuates with the startling force of a Microtech OTF automatic. Perhaps it’s the thicker, longer and beefier blade.

Regardless, it shares the same exceptional indent, while being able to feel its every oh-so-smooth action as well as the 16 ceramic ball bearings moving through the hands accentuated by the carbon fiber body. 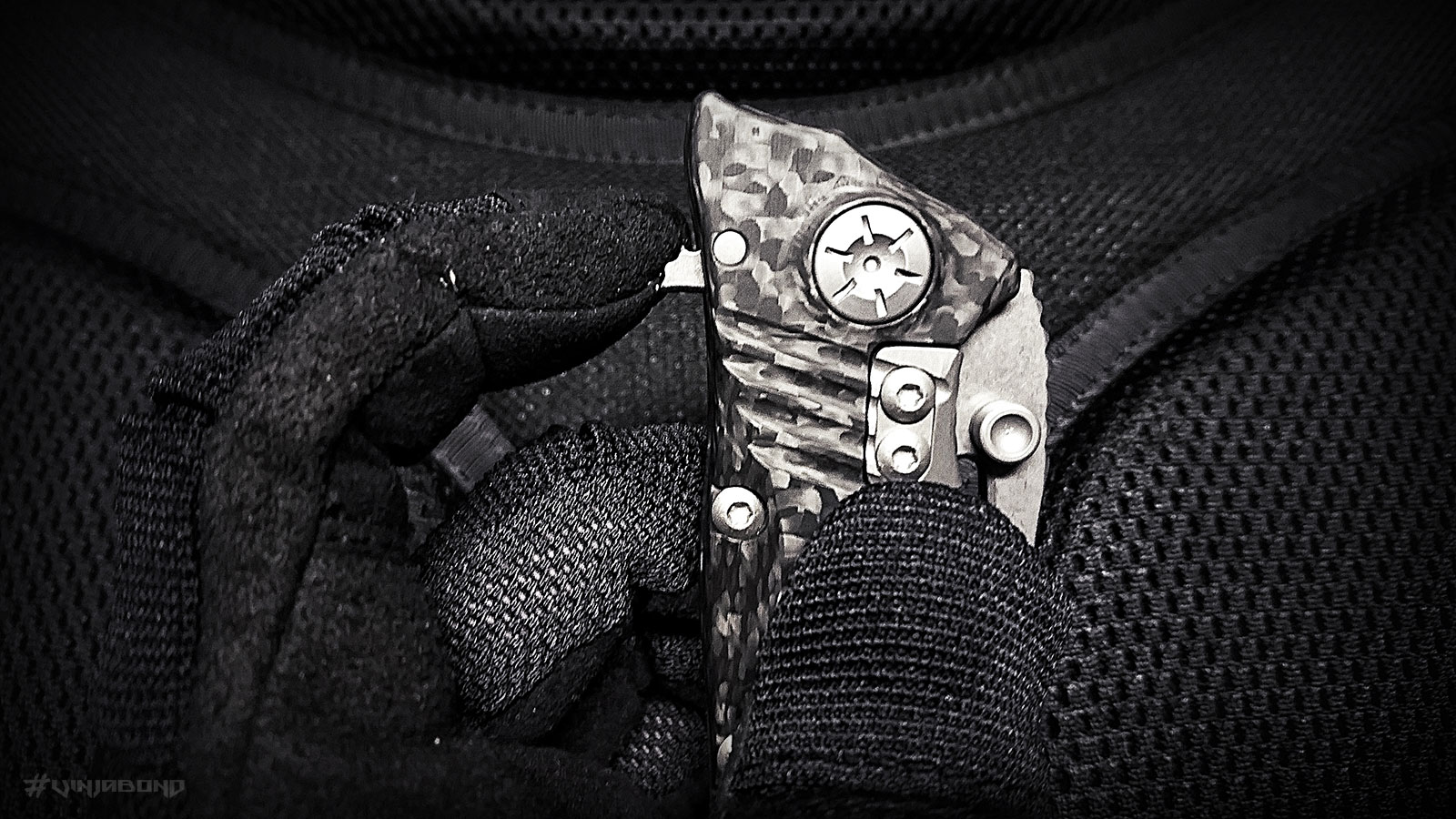 The sensation of holding hands with someone you’re freshly in love with is the greatest sense our human paws can sensate, even if each said hands are anatomically incompatible. It just feels right… Perfect.

That’s the feeling I get when I grip the Helix Nano Knife, except that it is indeed fluidly anatomically matched with my hand, or more precisely, tactically ergonomic.

This kind of connection is particularly important with an object that’s specifically designed (but not exclusively) for close quarters defense and combat.

A good knife should work like an extension of the hand but an exceptional one should operate like an extra phalanx of the hand. Tactical with surgical control.

Personally, the Helix Nano comes as close to that feeling than any other before it. 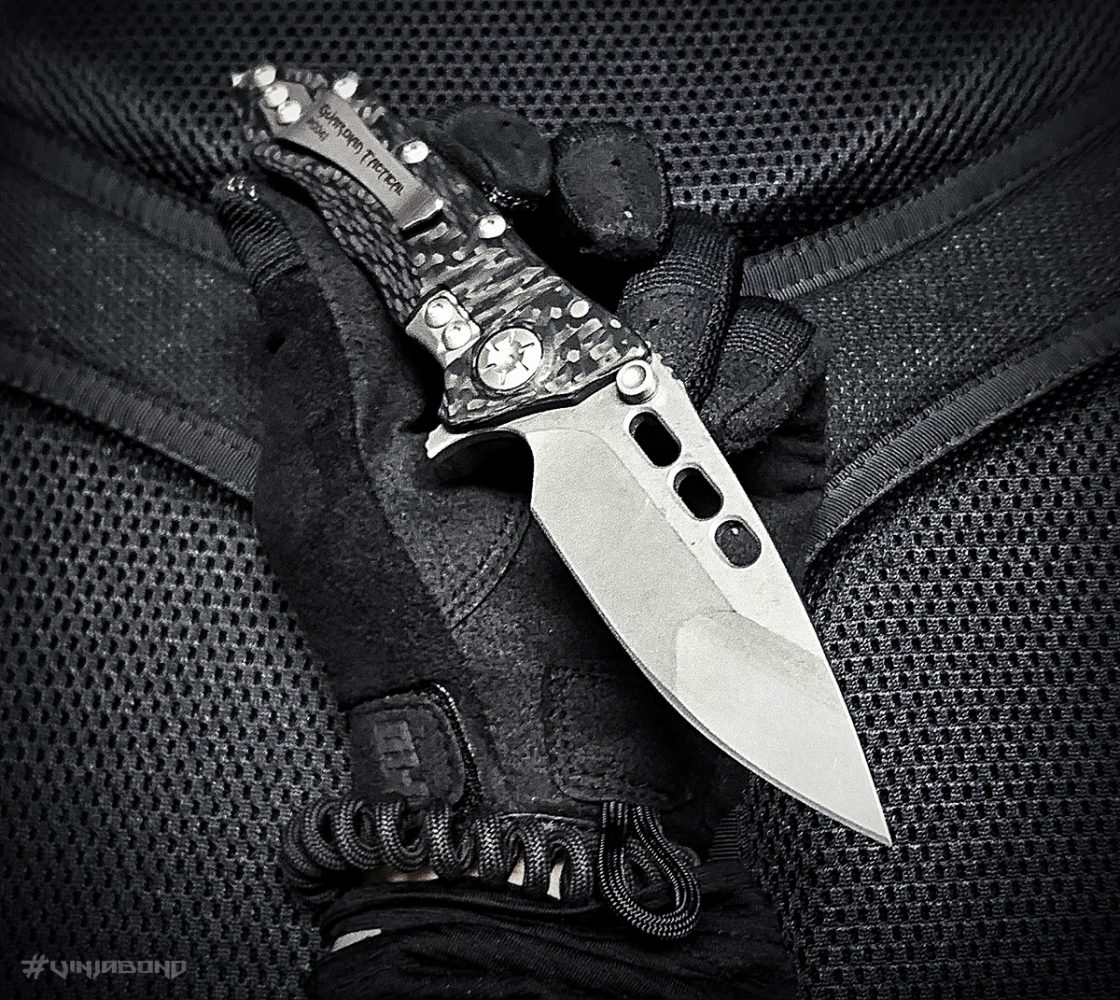