Now aka “Bun Cha Obama”, this local Hanoi restaurant was where Anthony Bourdain and President Obama famously ate and drank at for just $6.

“What can I tell you about what it’s like to sit across from the president of the United States and drink beer from the bottle? I can tell you that Barack Obama was, in spite of having had a high-ranking leader of the Taliban whacked in Pakistan a few days previous, very relaxed and at ease. He seemed to enjoy himself sitting on a low plastic stool eating noodles and pork bits with chopsticks.” –Anthony Bourdain

I briefly met President Barack Obama in a private ceremony in the twighlight of my career and one thing was for sure, politics aside, he had a sense of cool about him. Just a dude you can chill with.

His coolness and humanness is really conveyed when he had dinner and drinks with Anthony Bourdain at this ma and pa restaurant in Hanoi (video). For the then sitting President and most powerful human on earth, it made quite a splash for him to eat at such a cheap place with a security nightmare of a venue.

After finally making it to this part of Vietnam after overlanding the country with a motorcycle, we were hungry. Bun Cha Huong Lien was walking distance from our hotel in the Old Quarter of Hanoi.

So this restaurant isn’t in some snazzy or rich part of town. It’s a tight and gritty street most high priority targets like a President wouldn’t be caught dead in.

Because it’s an easy place to get dead in. 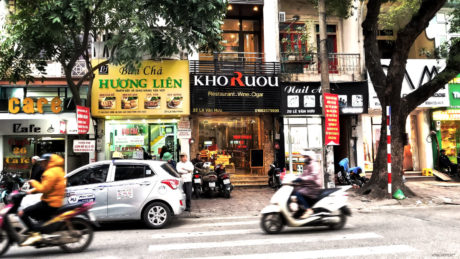 It was relatively hard to find, partly because we were expecting a big “Obama ate here!” sign or a giant poster of him on the restaurant facade.

The name of the restaurant was right, “Bún Chả Hương Liên”, but still nothing about him or Anthony Bourdain, even as we entered and looked for a table. 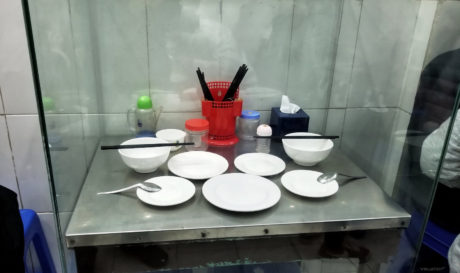 Then on the second floor there was a glass cube, preserving the very table, seats, dishes and utensils the pair feasted with back in May of 2016.

Excited, I hastily grabbed the table right in front of theirs and claiming my blue plastic stool, even though it was yet to be cleared from the patrons before. 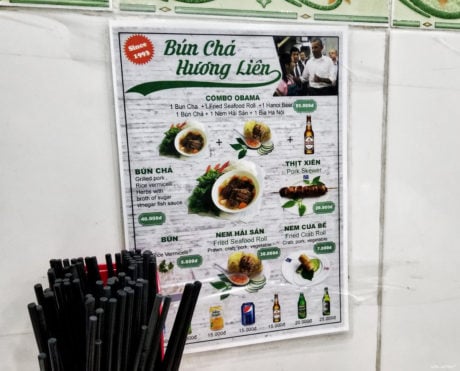 Fortunately they had a custom menu of the exact meal and beer they had; bun cha, which a sweet but hearty noodle dish with pork that’s like a supper / dessert fusion, a fried seafood roll and a Hanoi Beer.

Often with Vietnamese cuisine, our meal was on our table within a couple of minutes after ordering. After a guzzle of my beer, I went right in to the noodles. Massive portions with explosive taste. It was fantastic, the best bun cha I’ve ever had. 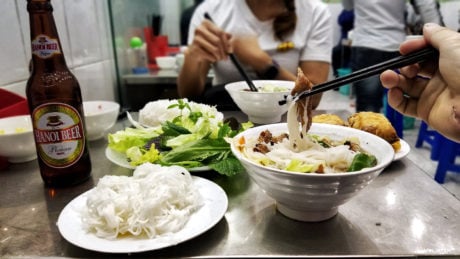 Our total for the 2 of us was 170,000 Dong, roughly $7.30 for a shit ton of food I couldn’t even finish. In contrast, Anthony Bourdain footed the bill for him and Obama for just $6 for the exact same items.

Despite the slight increase (over 2 years) in price, it’s still an undeniably good deal – and it includes beer! 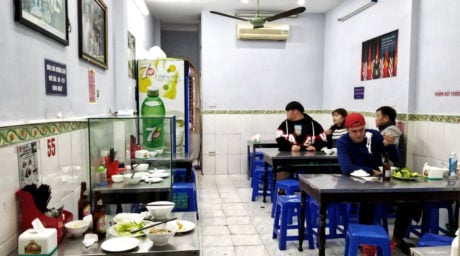 When it comes to eating good food and drinks while having a better time doing it, politics have no place for it. So regardless of how you may feel about President Obama, you should definitely give Bun Cha Huong Lien a shot if you’re ever in Hanoi, Vietnam.

The late and great Anthony Bourdain wouldn’t have taken the leader of the free world to a place cheaper than McDonald’s if he didn’t think it wasn’t one hell of a place to eat. Eat and rest in peace, sir.