For any number of reasons, direct in-person communication in public space may be the only option while making it seem like you’re not actually speaking to that person and or as if you’re complete strangers.

The purpose of this is to relay a short message or have an entire conversation with someone while assuming there are forces that have you or the other party under surveillance without raising suspicion. 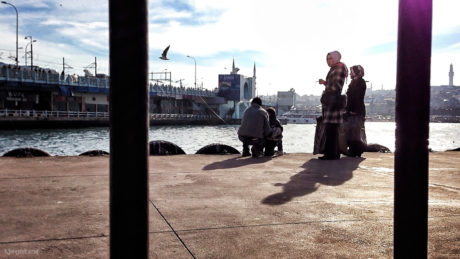 There are countless other methods of covert public conversing suited for each situation and scenario.

– Sitting close to each other but not facing each other (back to back) at a restaurant or public waiting station (bus, train)

[The featured photo was taken across the Galata Bridge on the north side of Istanbul, Turkey.]