Using an ATM is an ordinary everyday task but the very nature of money materializing from a machine out on the street make it a potentially high risk scenario, making you a target. This is a survival guide with ATM safety tips to enhance security and defense.

Muggings occur at ATMs for the same obvious reason why banks and jewelry shops are robbed, that’s where valuables are guaranteed to be at.

The perception that you’re about to have or do have verified cash on your person makes you a high-priority target on the street level of criminality.

When you’re perceived to be possessing valuables while on the streets, you are a target of opportunity.

As an active ATM user your situational awareness is compromised. You’re momentarily distracted, preoccupied, extremely vulnerable and exposed to attack – making you a prime target of opportunity.

In the eyes of an assailant, an ATM is a trap.

But when you walk into a trap knowing it’s a trap, you can do something about it with preparedness.

Given the attention diverting nature of using an ATM, the first and foremost self-defense measure to apply is widening your situational awareness to high alert.

The process of using an ATM is an exceedingly disadvantageous scenario to apply self-defense; mind focused on a bright backlit monitor, eyes directly facing a wall with decreased peripheral vision while your back is turned to the world (street, people).

Disadvantages lessened or made more manageable with active awareness of your surroundings.

This is the basis of all ATM safety tips and survival measures.

Diverted awareness while distracted by a machine in public is high risk. Significantly increased by wearing headphones, texting / talking on your mobile phone and fumbling through your wallet while not just during the use of an ATM but before and after using it.

If you don’t sense an attack coming, you may not be able to react or it could be over before you know what even happened as there may be no time to.

If you do sense a potential attack before it’s initiated, you can better react, counter or preemptively respond – even if it’s just a half second notice.

But in an ATM mugging scenario, a half second is an eternity as it can turn the tide of such an altercation. 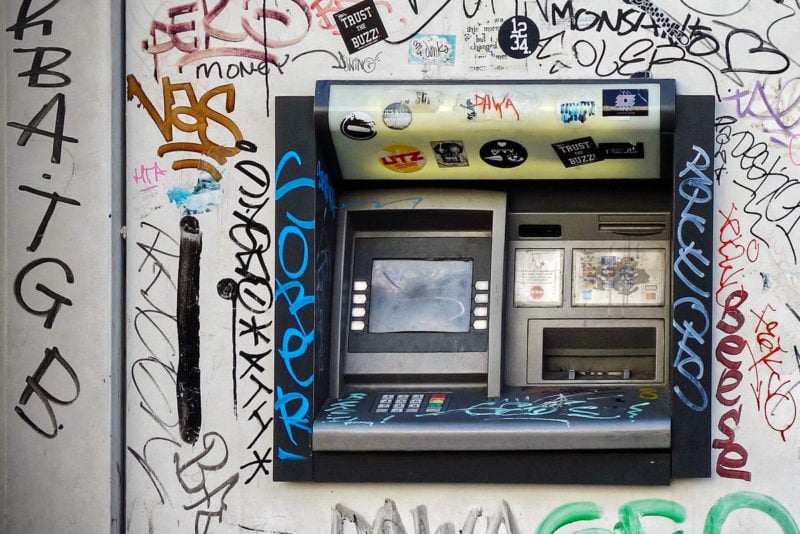 Don’t feel secure knowing there’s a security camera pointing right at you (the built-in camera, external camera) as it’s not for proximity security or user safety. It’s for the security of the actual ATM machine property and user fraud prevention.

That camera won’t scare off an assailant already bold (or desperate) enough to rob a person on the street. Furthermore, there’s rarely live surveillance.

Even with combat training and tradecraft dexterity to match your adept situational awareness, the best action (if possible) is disengagement – to run away and get distance from the threat.

Don’t engage the assailant(s) if you can escape.

If the scenario escalates or you can’t get away and direct combat has a low chance of success, toss the cash on the ground in front of them and run.

The assailant should be distracted and occupied grabbing the money off the ground, of which will give you a window to evade and find an escape route.

That’s a secondary measure to ensure that you don’t get robbed further beyond the cash that’s already out by taking your other valuable belongings or forcing you to withdrawal again from the ATM.

As a habit, never stick around the ATM longer than you have to after withdrawing to count the money, check the receipt or look at your phone. Put the cash in your pocket and keep moving. If there’s a problem with the amount dispensed, you’re supposed to contact your bank, not the ATM operator.

Organized or experienced ATM muggers may use surveillance techniques by watching you pull out money from a distance then following you until an opportune time / location to strike.

Although most ATM incidents occur during the late night, a vigilant mindset should always be active and your level of situational awareness should be just as intensive as if it was the dark of the night.

ATM safety isn’t just for when you’re using the machine, it starts before even reaching the ATM to when you’ve reached your next destination.