TQs have been used since the days of Alexander the Great. Further developed in Europe in the 1700s, more recently TQs have been credited with saving the lives of thousands of injured soldiers

In keeping with the operative method, introducing a new section on medical gear, theory and skills for an enhanced lifestyle and professional life.

“A registered Advanced Care Paramedic in Canada with over 13 years of experience as a remote, offshore & PSD medic with travel to over 50 countries and territories. A Toronto native, he currently splits his time between bases in Asia and Canada.” -Jonny ‘Ronin’ Rankine
Series Author

Each article in this series will highlight a key piece of gear – its history, use, alternatives, travel friendliness and cost effectiveness. You will have a well-informed Individual First Aid Kit (IFAK) that employs tacticalism, minimalism, nomadism and survivalism.

Note: The articles are no substitute for training and practice, and in no way constitute medical advice. Always train hard and operate according to your protocols. Please consider CPR, First Aid, PHTLS, ITLS, TECC, TCCC, EMR, EMT, Paramedic and other training options.

Why CoTCCC/C-TECC-recommended gear? Many of our current protocols in EMS have dramatically changed since the early 2000s, seeing the adoption of TCCC/TECC approaches to mass shooter incidents (MSIs) and mass casualty incidents (MCIs), paramedics going into ‘hot’ zones with Special Weapons/Response Teams, and an increased use of gear originally employed in battlefields now employed in civilian EMS.

History: TQs have been used since the days of Alexander the Great. Further developed in Europe in the 1700s, more recently TQs have been credited with saving the lives of thousands of injured soldiers in the wars in Afghanistan and Iraq, as well as First Responders and civilians around the world.

Use: A key phrase to use of a TQ is “high and tight”. The purpose of a TQ is to stop both venous and arterial blood flow to an extremity – either an arm or leg – by occluding blood flow and stopping hemorrhage.

We place the TQ’s cuff around the limb between the wound and the heart, high and tight on the arm or thigh, and never on a joint. By tightening the cuff with the windlass and then locking the windlass in place – with variations in design of course – we can prevent massive hemorrhage and get the patient to dedicated care with less chance of shock and death. It is important to note that there are cases when one TQ is not enough to occlude fully and a second TQ is applied near to the first one, so it is a good idea to carry two.

The CAT: Although there are various styles and purposes, the first TQ we will look at today is the CAT emergency TQ, essentially an adjustable cuff with a windlass that can be self-applied, easily trained on, is affordable and meets TCCC/TECC requirements.

In the competitive market of tourniquets, the CAT is tested and proven, and also now commonly anchors “Stop The Bleed” campaign kits. The CAT is my gold standard tourniquet (TQ), and I carry them in my EDC medical kit, my IFAK for remote/PSD work, any vehicles and my various paramedic jump bags.

Because the clip that holds the windlass is raised and rigid, the CAT is slightly thicker than others, but the difference is negligible. Priced around US $30, CATs are reasonably priced. CATs are available in tactical black, EMS orange and trainer model blue. Resist the temptation to buy cheap knock-offs, as there are many reports of failures at critical times – when they’re used.

Tip: An important point is that we always label, on the provided TQ label, the time the TQ was applied. This is for physicians’ reference once the patient reaches hospital. As a backup, I have always written with a black Sharpie marker “TQ: ## : ##” with the # indicating the time on the patient’s forehead just in case the TQ is moved, removed, or its label becomes stained and unreadable. In the past, we were also told to write it on the clothing at the patient’s shoulder, but often clothing can be cut away making that unreliable.

There are alternatives to the CAT. Both the CoTCCC and C-TECC recommend the CAT, the SOF-TW and the EMT. There is also the SWAT-T and the RATS, although these are not CoTCCC and C-TECC-recommended.

The SOF-TW is very similar to the CAT. I like and use both, although I have many CATs and just one SOF-TW. I find the SOF-TW packs or mounts flatter than the CAT. Use is roughly the same, although some find the CAT slightly faster to apply and easier to apply with one hand. Another point is the SOF-TW is also priced similarly to the CAT at around US $30.

Because the CAT’s windlass is a plastic material, there were some concerns on earlier models about the strength of the windlass. On the other hand, the SOF-TW’s windlass is aluminium and feels more durable. However, it once received a more detailed examination going through airport security though it was finally accepted, so for Carry-On luggage purposes at airports, the CAT could be considered seamless and the SOF-TW’s metal windlass could be flagged for secondary examination or even confiscated by an overzealous screener.

I have not yet been able to try the EMT, as they are not commonly used or widely sold yet, but the research is solid and comments on it are positive. Imagine a TQ combined with a blood pressure cuff. Application seems easy enough and the wide cuff appears it would be more comfortable and less prone to causing tissue damage, but the extra step of closing the dial valve and squeezing the pneumatic bulb – possibly one-handed, not to mention more parts equal more possible failure points, make me consider this something I’d like to test out, but given these points and its costs, I’ll wait until someone has one I can try out.

It might be an investment to keep on board ship, an offshore rig, or in a very remote location where risk analysis shows increased risk of amputations or other serious injuries where a surgical level of tourniquet would be advisable. Coming in at CAD $475, one costs the same as roughly 15 CATs or SOF-TWs.

If we remember the best gear is that which you carry, for my on-my-person EDC [in addition to a CAT in my EDC bag] I carry a SWAT-T TQ in a small, flat belt pouch that sits at the small of my back along with gloves, flat CPR mask, gauze, wipes, tape and bandaids. If I take out the couple of large safety pins I also usually keep in the pouch, it goes through metal detectors and security checks with no issues.

I consider the SWAT-T a good backup EDC TQ for its portability, but it’s important to note it is hard to apply one-handed for self-help and tests lower than both the CAT and SOF-TW for effectiveness, which is why it is not CoTCCC and C-TECC-recommended. Combined with gauze, it also makes a good pressure dressing. In a tough situation, such as a MSI, you might apply the CAT or SOF-TW to yourself and use the SWAT-T on another patient.

Priced at US $18, they are cheaper than the CAT and SOF-TW and, if considered a back-up TQ, reasonable. They come in black and orange.

People either love or hate the RATS, it seems. On the positive side, it is cheaper than the CAT, SOF-TW and EMT, is very portable and it can be applied quickly. On the negative side, it is essentially a bungee you wrap around a limb several times and tie-off using its clip, meaning instead of one, wide band you are wrapping several thin tight bands around a limb, running contrary to evidence-based medicine which demonstrate wider is better.

This, and the inconsistent tightening that can occur, are the two main criticisms explaining why it also is not CoTCCC and C-TECC-recommended. Priced at US $18, they come in black, red and orange. 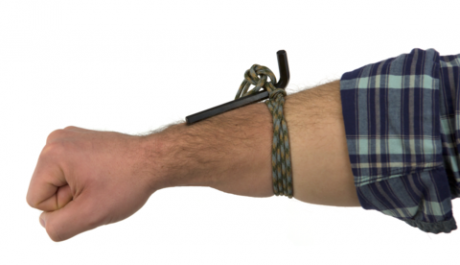 DIY: Worst-case scenario, a wide belt, a wide band or thick rope combined with a suitable item used in place of a windlass, such as a flashlight or tactical pen, and a caribiner to lock the windlass in place can make a basic, DIY TQ.

Of course, after reading this article, taking training, and choosing the best TQ for your needs, you will be better prepared, but it is always good to look at your EDC and travel items and find multiple uses and redundancies.

To sum up, you’ll not go wrong with either the CAT or the SOF-TW as your first choice. The EMT seems a distant (and pricy) second choice. The SWAT-T is fine as a EDC backup TQ. I don’t recommend the RATS. Finally, DIY is an option, but not your go-to.