This is a life tactic post inspired by President Trump’s grandiose defense of his deficient mental acuity as described in the scorching Fire and Fury book.

This post is impromptu. I didn’t have it scheduled, saved as a draft or have I thought too much about it. I’m just writing blah blah blah, etcetera etcetera as I go along. Just like how Donald J Trump tweets, and also to the terrifying reality that that’s how he also runs the most important office in our dear country.

It’s liberating to do what you want, say what you want and act like you want without thinking about the consequences to oneself and the people it may affect. This wonderfully careless and selfish way of existing is a right usually reserved for small children.

This may be hypocritical but these words are being written as quickly as the thoughts are materializing. It’s because I was inspired by 45’s tweets just hours earlier.

In the last few days, excerpts of Michael Wolff’s incendiary book surfaced on the web then went viral before its early release 24 hours ago. There’s a long list of negative adjectives and nouns describing Trump but it was how “childish” and “stupid” he was portrayed by so many at the White House that struck the President’s nerve.

Rattling his ego so badly to tweet to his 46 million followers and to the rest of the world this defense: 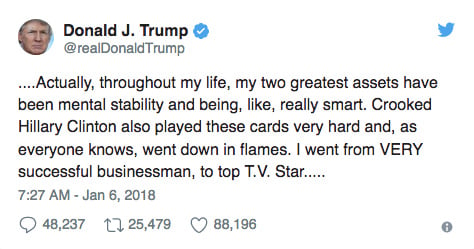 “…my two greatest assets have been mental stability and being, like, really smart.”

“I went from VERY successful businessman, to top T.V. Star to President of the United States (on my first try).”

***Actually no, this is false as he first tried in 2000. This is rather a calculated lie or a sypmtom of his declined mental acuity.

“I think that would qualify as not smart, but genius….and a very stable genius at that!”

What kind of a person has to yell to the world that they are mentally stable? An insane person.

What king of a person has to yell to the world that they are “like, really smart”? A ditzy high school girl with low intelligence.

What kind of a person has to yell to the world that they are a “very stable genius”? An unstable, insane and ditzy high school girl with low intelligence.

“A true genius admits that he/she knows nothing.”     -Albert Einstein

So why is this a Life Tactics post? Well there’s a few very important life lessons to be learned from today’s actions of the world’s most powerful person.

If you beat an opponent (Hillary) at anything, fairly or not, be a good sportsman.

-As by being the winner, well, you’re the fuc*king winner – that’s awesome. Take the pride and prize and move on. Anything else makes you a weak winner, and that’s worse than being a sore loser.

Don’t broadcast your intelligence or sanity.

-This is particularly bad when you’re lacking in this department. An actual genius doesn’t tell everyone (literally in Trump’s case) that they are a genius any more than a sane person yells how mentally stable they are. It’s the ultimate way to show your insecurity and inferiority. Also, it makes you look like a dumb ass or just bat shit crazy – again, both in Trump’s case. Instead, practice stealth cognizance.

Keep track of your lies.

-We all lie for one reason or another, this is normal human behaviour. But don’t lie if it’s easily refutable, especially on a platform that reaches billions of people. So always recount any past lie that might dispute what you have to say next. Or, just don’t lie to the people you’re leading.

Remember that the internet never forgets.

-Trump’s lies, remarks and decisions are all recorded on the internet. Even if it’s deleted, there will be another copy somewhere else. It is all being collected as historical data for now and future generations to judge not just him, but whatever we may do that’s permanently embedded in the net. So always think twice before posting or commenting on something your girlfriend or mother might not be proud of.

-It takes an American to understand why another American could have possibly voted for Trump. But now a year has passed and as an American and a patriot, I can’t possibly understand how another American can support him now with all he’s done, or the lack thereof. Forget the past year for a moment and judge Trump by his own words today and you must see he is unfit to be any sort of leader. 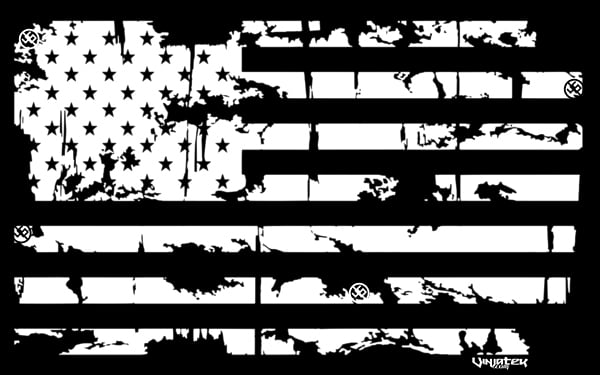 “My two greatest assets have been mental stability and being, like, really smart… and a very stable genius…”     -Donald J Trump